Ed Rubin specializes in administrative law, constitutional law and legal theory. A productive and erudite scholar whose work integrates legal history and theory, Professor Rubin is the author of numerous books, articles and book chapters. His most recent book, Making Regulation Work: Policies, Techniques and the Abolition of Property Restrictions (2021), makes a practical case for regulation as an essential feature of modern government. Rubin joined Vanderbilt Law School as Dean and the first John Wade–Kent Syverud Professor of Law in July 2005, serving a four-year term that ended in June 2009. Previously, he was the Theodore K. Warner, Jr. Professor of Law at the University of Pennsylvania Law School from 1998 to 2005, and the Richard K. Jennings Professor of Law at the Boalt Hall School of Law at the University of California-Berkeley, where he had taught since 1982 and served as an associate dean. Professor Rubin has been chair of the Association of American Law Schools' sections on Administrative Law and Socioeconomics and of its Committee on the Curriculum. After graduating from Princeton, he worked as a curriculum planner for the New York City Board of Education. He received his law degree from Yale University in 1979, he was a law clerk for Judge Jon O. Newman of the U.S. Court of Appeals for the Second Circuit and then practiced law as an associate in the entertainment law department of Paul Weiss Rifkind Wharton & Garrison in New York. He has served as a consultant to the People's Republic of China on administrative law, and to the Russian Federation on payments law. In addition to teaching Administrative Law and Regulatory State at the law school, Professor Rubin teaches two undergraduate courses, the Government and Morality seminar and Visions of the Future in Science Fiction, an Undergraduate Commons course. 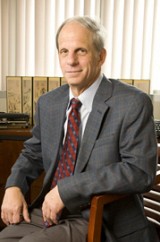