Gary Brown is a partner in Nelson Mullins Riley & Scarborough’s Nashville office, where he focuses on securities compliance and corporate governance. An expert in securities regulation who taught at Vanderbilt as a member of the adjunct law faculty from 1996 to 2011, Professor Brown spent six years serving as the CEO of a Florida-based financial services company that specialized in the life insurance settlement industry before returning to legal practice in 2018. A specialist in securities fraud forensic investigations, Brown has supported the U.S. Senate investigations into the causes of the 2002 collapse of Enron Corp. and the role of investment banks in the 2008 financial crisis over his more than 30 years of legal practice. In those roles, he provided advice on the resulting legislation, including the Sarbanes-Oxley Act and the Dodd-Frank Wall Street Reform and Consumer Protection Act. He has represented boards of directors, special committees of boards and corporate executives in matters involving SEC and Department of Justice investigations, activist shareholders and strategic decisions. Brown was inducted into the Order of the Coif after earning his J.D. at Vanderbilt, where he was editor of the Vanderbilt Law Review. He also is a frequent speaker and author for the Practising Law Institute, where he authors the Securities Law and Practice Deskbook and Master the 8-K. 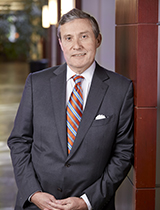