Ingrid Wuerth is a leading scholar of foreign affairs, public international law and transnational litigation. She joined Vanderbilt’s law faculty in 2007, was appointed director of the International Legal Studies Program in 2009, and was appointed director of the Branstetter Litigation & Dispute Resolution Program in 2018. She was named to the newly endowed Helen Strong Curry Chair in International Law in 2015 and is currently serving as associate dean for research. Dean Wuerth has served on the board of editors of the American Journal of International Law and on the State Department’s Advisory Committee on Public International Law. She is a member of the American Law Institute and was named as a Reporter for the Restatement (Fourth) of the Foreign Relations Law of the United States. She has received numerous honors and fellowships, including the Morehead Scholarship at the University of North Carolina at Chapel Hill, a Fulbright Senior Scholar award, the German Chancellor's Fellowship, election to the German Society of International Law, election to the Order of the Coif and many teaching awards. She clerked for Judge Jan E. DuBois in the Eastern District of Pennsylvania and for Judge Jane Roth on the U.S. Court of Appeals for the Third Circuit. The class of 2018 elected Professor Wuerth to give the commencement address. She is a contributing editor at Lawfare. 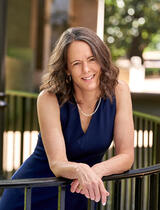