Jim Blumstein ranks among the nation’s most prominent scholars of health law, law and medicine, and voting rights. He is currently one of eight University Professors at Vanderbilt; he was the first awarded that title in the law school and the first to receive a second tenured appointment in Vanderbilt Medical School. The director of Vanderbilt’s Health Policy Center, Professor Blumstein has served as the principal investigator on numerous grants concerning managed care, hospital management and medical malpractice. His peers recognized his leadership in health law and policy by electing Blumstein to the National Academy of Sciences’ Institute of Medicine (now the National Academy of Medicine), and he was awarded the Earl Sutherland Prize, which is Vanderbilt’s preeminent university-wide recognition for lifetime scholarly contributions. In 2007, he received the prestigious McDonald-Merrill-Ketcham Memorial Award for Excellence in Law and Medicine from the Indiana University and delivered the award lecture on hospital-physician joint-venture relationships. Blumstein has been the Olin Visiting Professor at the University of Pennsylvania Law School, an adjunct professor at Dartmouth Medical School, and a visiting professor at Duke Law School and at Duke’s Institute of Policy Sciences and Public Affairs. He has served as former Tennessee Governor Phil Bredesen’s counsel on TennCare reform and has participated actively in a number of Supreme Court cases, arguing three. In 2014, Blumstein received a secondary appointment as a professor of management at the Owen Graduate School of Management. A dedicated teacher, Blumstein has received the law school’s student-sponsored Hall-Hartman Teaching Award. He joined Vanderbilt’s law faculty in 1970. 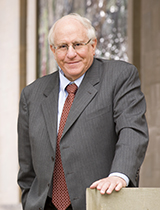