Jeff Schoenblum has established himself as one of the world's preeminent scholars and experts on cross-border private wealth transfers. In addition to publishing several well-received books and articles, Professor Schoenblum has delivered a number of leading lectures, including the Norton Rose Lecture at Oxford, the Paolo Fresco Lecture at the University of Genoa, the Nottingham Lecture, and the 2015 Hugh J. and Frank Tamisea Lecture at the University of Iowa Law School. In 2016, Schoenblum was elected to the Estate Planning Hall of Fame. He joined Vanderbilt's law faculty in 1977 after practicing law at Willkie Farr & Gallagher and serving as a law clerk for Judge Edward Lumbard of the U.S. Court of Appeals for the Second Circuit. He has been honored on numerous occasions with the law school's annual student-selected Hall-Hartman Award for excellence in teaching and was chosen by students to deliver the inaugural Commencement speech by a law professor in 2010. 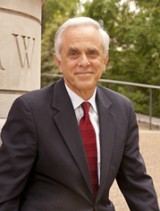