Jennifer Swezey joined Vanderbilt’s legal writing faculty in 2007 and was named director of the program in 2015. She teaches Legal Research and Writing to first-year J.D. students as well as Introduction to Legal Analysis in the United States to LL.M. students. She has worked in legal education since 1999, having taught legal research and writing and served on the academic administrative staffs of Barry University School of Law in Orlando, Florida, and Florida Coastal School of Law in Jacksonville, Florida. At both schools, Professor Swezey was actively involved in the American Bar Association accreditation process and developed, implemented and administered the academic support and bar preparatory programs. She has been admitted to the bar in New Jersey and in Pennsylvania. In addition to her law degree from Rutgers School of Law and her undergraduate degree from Ursinus College, she holds a master's degree in critical theory from the University of Nottingham in England. 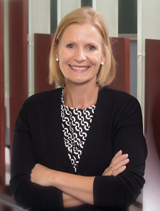