Karla McKanders is an expert on immigration, race and the administrative state. Her research, scholarship and advocacy has taken her throughout the U.S. and abroad teaching and researching the efficacy of immigration policies, laws and legal institutions charged with processing migrants. In 2020, she was appointed associate director of Vanderbilt’s clinical program. As the founding director of the Immigration Practice Clinic, Professor McKanders supervises students providing representation to asylum seekers and unaccompanied minor children in their humanitarian immigration cases before the Department of Homeland Security, the Department of Justice and federal courts of appeals. Her clinic has also worked in Nashville and nationally advocating for immigrant communities in Supreme Court amicus briefs, legislative and policy advocacy.

During the 2016 -17 academic year, McKanders was a visiting associate professor at Howard University School of Law, where she directed the Civil Rights Clinic, in which her students collaborated with NAACP LDF, the Advancement Project and other national organizations writing appellate and Supreme Court Amicus briefs in civil rights and social justice litigation. Before joining Vanderbilt’s law faculty, McKanders was a tenured associate professor at University of Tennessee College of Law, where she started the first Immigration Clinic in the state. While at Tennessee, she received a Fulbright grant in 2011 to lecture on refugee and humanitarian law in Rabat, Morocco. In Morocco, she helped start a refugee legal aid organization for asylum seekers presenting their refugee status determinations before UNHCR. After the Fulbright, she was selected in 2018 as the scholar in residence with the Hilary Clinton Center for Gender at Al Akhawayn University in Ifrane, Morocco, where she examined the application of the Refugee Convention in Morocco, focusing on how individuals with gender-based reasons for fleeing persecution and asylum seekers of African descent were precluded from presenting their cases to obtain refugee status under existing legal frameworks. In 2019, she collaborated with scholars from the Middle East, North Africa and the United States, as the editor of the volume, Arabs at Home and in the World: Human Rights, Gender Politics and Identity.

McKanders chairs the American Bar Association’s Commission on Immigration. At Vanderbilt University, she sits on the advisory committee of the James Lawson Institute for the Research and Study of Nonviolent Movements. Before joining the legal academy, she clerked for Judge Damon J. Keith of the U.S. Court of Appeals for the Sixth Circuit in Detroit. 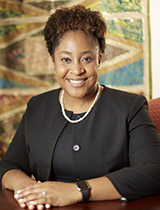