Larry Reeves directs the operations of the Alyne Queener Massey Law Library at Vanderbilt Law School. Dean Reeves joined Vanderbilt as head of the law library in 2012 with more than 10 years of experience in law library administration. He had previously served from 2008-11 as associate director of the George Mason University Law Library in Arlington, Virginia. Before joining George Mason’s law library, he was a reference librarian, coordinator of first-year legal research, and an adjunct associate professor of law at Fordham Law School in New York, where he developed the required first-year course, Basic Legal Research, and taught Advanced Legal Research. He has also served as a reference librarian in the law libraries of Loyola Law School in Los Angeles and Brooklyn Law School in Brooklyn, New York. He has taught as a member of the adjunct faculty of the Catholic University School of Library and Information Science and served on the school’s Law Librarianship Advisory Committee. He is the author of numerous journal articles, an editorial advisor of a research bibliography, Sexual Orientation and the Law (Hein, 2007), and has spoken and coordinated programs at numerous conferences. Dean Reeves is an active member of the American Association of Law Libraries, having served on the Bylaws Committee, and chaired the organization’s Social Responsibilities Special Interest Section in 2009 and 2010. Dean Reeves was elected to a two-year term as secretary of the Legal Information Preservation Alliance, named a fellow with the Association of Research Libraries Leadership program for 2013 to 2015, and was elected in 2015 to a three-year term as chair of the Society of Academic Law Library Directors. He teaches Advanced Legal Research. 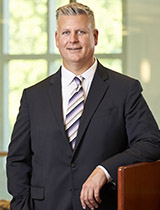