Lauren Benton is a comparative and world historian whose research focuses on law in European empires, the history of international law, and Atlantic world history. She is the author of four books, including three in global legal history: Rage for Order: The British Empire and the Origins of International Law, 1800-1850 (Harvard University Press, 2016), coauthored with Lisa Ford; A Search for Sovereignty: Law and Geography in European Empires, 1400-1900 (Cambridge University Press, 2010); and Law and Colonial Cultures: Legal Regimes in World History, 1400-1900 (Cambridge University Press, 2001), which was awarded the J. Willard Hurst Prize and the World History Association Bentley Book Prize. Benton's three coedited books include (with Bain Atwood and Adam Clulow) Protection and Empire: A Global History (Cambridge University Press, 2017) and (with Richard Ross) Legal Pluralism and Empires, 1500-1850 (New York University Press, 2013).
Benton began her scholarly career as an economic anthropologist researching industrial labor and the informal economy in Spain and Latin America (Invisible Factories: The Informal Economy and Industrial Development in Spain, SUNY Press, 1990; and coedited with Alejandro Portes and Manuel Castells, The Informal Sector: Studies in Advanced and Less Developed Countries, Johns Hopkins University Press, 1989). Before coming to Vanderbilt, Benton was Julius Silver Professor of History at NYU, where she served as Dean for the Humanities and Dean of the Graduate School. At Vanderbilt, Benton served as Dean of the College of Arts and Science from July 2015 to January 2018.
Benton is currently president-elect of the American Society for Legal History. In 2019, the Toynbee Foundation will award Benton the Toynbee Prize for significant contributions to global history. She is also a 2019 Guggenheim Foundation Fellow and a 2019-2020 member of the Institute for Advanced Study. 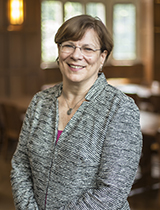