Lisa Schultz Bressman is an innovative scholar in administrative law and statutory interpretation. She is one of the most cited scholars in the area of administrative law. Her recent work focuses on the Supreme Court’s rules of self-regulation and offers current snapshots of the administrative state, including an article with colleague Kevin Stack describing Chevron as a phoenix likely to rise from the ashes even if overruled, an essay examining the view of Chief Justice Roberts on the legitimacy of modern agency structure, and an essay exploring an early effort of President Biden to reinvision regulatory review. Her prior work includes an article with Abbe Gluck of Yale Law School discussing the results of the largest empirical study to date of congressional drafting and the implications for statutory interpretation and administrative law. Other articles attempt to better account for the legal fiction of congressional delegation in statutory interpretation and to reimagine congressional delegation as a genuine feature of judicial deference doctrine. Her article, with former colleague Robert Thompson, challenges the binary distinction between executive-branch and independent agencies, focusing on financial agencies. In addition, Dean Bressman has used insights from positive political theory to elaborate the relationship between administrative procedures and congressional delegation. In several seminal pieces, she has explored the relationship between accountability and arbitrariness in agency action as well as an empirical study done with colleague Michael Vandenbergh on the agency experience with presidential control. She has co-authored, with Vanderbilt colleagues Edward Rubin and Kevin Stack, The Regulatory State, a course book designed to teach statutes and regulations to students, particularly in the first year of law school. Bressman began a term as associate dean for academic affairs in 2021, having previously served in the same position from 2010 to 2016. She was co-director of Vanderbilt’s Regulatory Program from 2006 to 2010. She joined the Vanderbilt law faculty in 1998 after working in the Office of Legal Counsel in the Department of Justice and serving as a law clerk for U.S. Supreme Court Justice Stephen Breyer and U.S. Court of Appeals for the Second Circuit Judge José A. Cabranes when he was Chief Judge of the U.S. District Court of Connecticut. She was a Roscoe Pound Visiting Professor of Law at Harvard Law School in fall 2008. She served as a public member of the Administrative Conference of the United States. 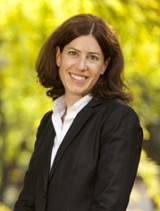