Martesha L. Johnson will be sworn in as the elected Public Defender of the Metropolitan Nashville Public Defender’s Office in September 2018, becoming the first African-American to hold the position. Since joining the Public Defender’s Office in 2009, Johnson has represented clients from diverse social, economic and educational backgrounds in general sessions and state criminal court, conducting hearings, trials, factual investigations, legal research and negotiations. She has also led two criminal court teams and been a part of leadership and policy making groups, including the Community Corrections Advisory Board. Johnson earned her undergraduate degree at Tennessee State University and her J.D. from the University of Tennessee College of Law, where she was recognized as the Julian Blackshear, Jr. outstanding student and honored for her public service work. She is a member of the Nashville Bar Association, the Napier-Looby Bar Association, the Tennessee Trial Lawyers Association, the National Association of Public Defenders, the Tennessee Association of Criminal Defense Lawyers and the young leaders division of Women for Tennessee’s Future. Johnson was a member of the 2016-17 class of the Nashville Bar Foundation Leadership Forum and is a graduate of Gideon’s Promise, a program specifically designed to train and develop public defenders. In addition to serving on Vanderbilt’s adjunct law faculty, Johnson has also taught at Volunteer State Community College. 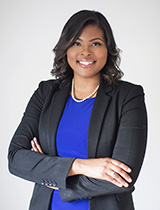