Lee S. and Charles A. Speir Chair in Law

Nancy King is an expert in criminal procedure. Her work focuses on the post-investigative features of the criminal process, including plea bargaining, trials, juries, sentencing, appeals, double jeopardy and post-conviction review. Over the course of her academic career, she has authored or co-authored two leading multi-volume treatises on criminal procedure, the leading criminal procedure casebook, dozens of articles and book chapters, and several books, including Habeas for the Twenty-First Century: Uses, Abuses and the Future of the Great Writ (University of Chicago Press, 2011). Professor King is an Associate Reporter for and former member of the Advisory Committee on the Federal Rules of Criminal Procedure, and a member of the American Law Institute. She was Touroff-Glueck Visiting Professor of Law at Harvard Law School in fall 2015. King served as Vanderbilt's associate dean for research and faculty development from 1999 to 2001, and was the FedEx Research Professor in 2001-02. In 2005, she received the Chancellor's Award for Research at Vanderbilt for her research on jury sentencing, "Jury Sentencing in Practice: A Three-State Study" (57 Vanderbilt Law Review 885, 2004),  which she co-authored with Rosevelt Noble, director of  Vanderbilt University's Bishop Joseph Johnson Black Cultural Center. She and two researchers from the National Center for State Courts led a national study of habeas litigation in U.S. District Courts funded by an award from the National Institute of Justice. In 2010, Professor King received the university's Alexander Heard Distinguished Service Professor Award, given each year to a single faculty member whose research has made distinctive contributions to the understanding of contemporary society. 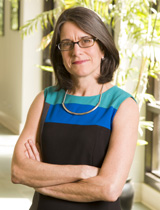