Nicholas S. Zeppos rejoined the law faculty in 2020, where he teaches and studies civil procedure, after serving for more than a decade as Vanderbilt University’s eighth chancellor. An esteemed legal scholar, teacher, and higher education leader, Chancellor Zeppos was honored in November 2019 with two new appointments as University Distinguished Professor and Cornelius Vanderbilt Chancellor Emeritus Chair, the highest appointments a university can bestow. He joined the Vanderbilt law faculty in 1987 and served as a professor of law and associate dean before joining the university administration as associate provost for academic affairs and vice chancellor and provost. He was named chancellor in 2008.
Under Zeppos’ leadership, Vanderbilt University has become one of America’s foremost research institutions. In 2008 Zeppos led the launch of Opportunity Vanderbilt, the university’s pioneering financial aid program, which replaced undergraduate student loans with scholarships. Zeppos was also instrumental in planning and executing Vanderbilt’s residential college system, which now includes four undergraduate colleges. In November 2019, the university recognized Zeppos’ leadership and legacy by naming one of its newest residential colleges in his honor.
In 2016 Zeppos led the complex transition of the university and Vanderbilt University Medical Center into two separate legal and financial entities, a prescient restructuring that positioned both institutions for long-term success. Zeppos also more than doubled Vanderbilt’s number of endowed faculty chairs during his time as Chancellor, from 200 to 426.
Zeppos has been an outspoken advocate for the university’s imperative to foster opportunities and respect for all and to offer a welcoming and inclusive environment and supportive campus culture. He created the role of vice chancellor for equity, diversity and inclusion and chief diversity officer.
Throughout his career, Zeppos has been an effective advocate for higher education and the essential value and impact of academic research at the state and federal level and a vigorous and successful defender of critical funding for research and education. In 2015 he co-chaired the bipartisan U.S. Senate Task Force on Government Regulation of Higher Education and conducted the foremost national study on the high cost of regulatory burdens on America’s research universities.
He has been recognized with multiple awards, including INSIGHT Into Diversity magazine’s Giving Back Award in 2016, the Tennessee Tribune’s “Person of the Year” in 2016, and the Jack C. Massey Leadership Award from Mental Health America of Middle Tennessee in 2011. As a law professor, he was honored with five teaching awards.
Zeppos currently serves as a member of the board to Harvard-affiliated McLean Hospital. He has served as the chair of the Association of American Universities Board of Directors, and has served as a board member for the Consortium on Financing Higher Education, Vanderbilt University Medical Center and the Knight Commission on Intercollegiate Athletics, and as president of the Southeastern Conference Executive Committee. 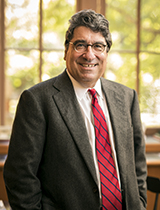