Paul Deemer has spent his legal career with Vinson & Elkins, focusing on international mergers and acquisitions and on the development and financing of international energy project. Over the course of his career, he opened his firm’s offices in Moscow, Russia, and Beijing, China, where he was based from 2002 to 2013. He was based in his firm’s offices in London for 18 years prior to moving to Beijing and still maintains offices in both cities. He currently works of counsel with the firm on energy transactions and projects, assisting companies headquartered in one country in the acquisition of energy companies and assets in other nations. He is admitted to legal practice in Texas and is a solicitor of the Senior Courts of England and Wales. He is a fellow of the Royal Geographic Society and a member of the Association of International Petroleum Negotiators. 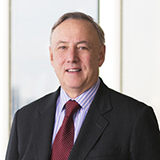