Randall Thomas has earned a reputation of being one of the most productive and thoughtful corporate and securities law scholars in the nation. His recent work addresses issues such as hedge fund shareholder activism, executive compensation, corporate voting, corporate litigation, shareholder voting, and mergers and acquisitions. Twelve of his papers have been selected by his peers as among the Ten Best Corporate and Securities articles in the year they were published by Corporate Practice Commentator.

Professor Thomas joined the Vanderbilt law faculty in 2000 to develop and direct the Law and Business Program, having served previously for 10 years on the law faculty of the University of Iowa. He has been a visiting professor at the University of Michigan, Duke University, Harvard Law School, Boston University and the University of Washington. Prior to teaching law, Thomas was in private practice for four years and was a law clerk for U.S. District Judge Charles Joiner of the Eastern District of Michigan. An acclaimed teacher, Professor Thomas teaches courses in the area of corporate law, including Corporations and Mergers and Acquisitions. 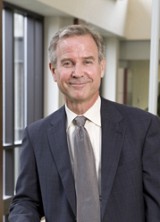