Sara Mayeux is a legal historian of the twentieth-century United States, focusing on criminal law and procedure, constitutional law and legal culture. She is also interested broadly in the interplay between law and history. Her book, Free Justice: A History of the Public Defender in Twentieth-Century America (UNC Press, 2020), was praised in The Nation magazine as “a definitive history of this important yet conflicted institution,” and received the 2020 Langum Prize in American Legal History. The book chronicles debates about indigent criminal defense from the Progressive Era through the Cold War. In 2017, her Columbia Law Review article on the effects of Gideon v. Wainwright, “What Gideon Did," received the Cromwell Article Prize, awarded annually for the best article in American legal history published by an early career scholar. Professor Mayeux earned her law degree, as well as her Ph.D. in history, from Stanford University. Before joining Vanderbilt’s law faculty in 2016, she was a Sharswood Fellow at the University of Pennsylvania Law School and the Berger-Howe Legal History Fellow at Harvard Law School. Before entering the legal academy, she clerked for Judge Marsha S. Berzon of the U.S. Court of Appeals for the Ninth Circuit.

"And a Public Defender for All," a column about Ketanji Brown Jackson's becoming the first former public defender to serve on the Supreme Court in Inquest, April 12, 2022

"Free Justice: A History of the Public Defender in Twentieth-Century America," a podcast based on her new book, posted at newbooksnetwork.com, Sep. 1, 2020
"Sara Mayeux on the History of the Public Defender," a podcast on her new book, posted Jul. 21, 2020
"The Evolution of Free Speech," a podcast by With Good Reason at Virginia Humanities and James Madison’s Montpelier, posted Sep. 17, 2018
"Litigating the Line Between Past and Present," posted at bunkhistory.org, Sep. 28, 2017 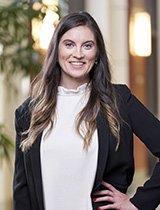