Sheila Calloway was elected to an eight-term as Davidson County’s Juvenile Court Judge in 2014. She had previously served as a Juvenile Court Magistrate in Davidson County since 2004, when she was appointed to the position by Judge Betty Adams Green. At Vanderbilt, Judge Calloway teaches both in the undergraduate and law schools. She is also serves on the adjunct faculty at American Baptist College, where she teaches Criminal Justice. Judge Calloway applies her practical experience as a juvenile court judge to her work on restorative justice; she was a featured speaker with TEDxNashville on “Can Forgiveness Transform the Criminal Justice System” in 2017. She has been recognized with numerous honors and awards, including the 2018 Tennessee Justice Center Hall of Fame Award by the Tennessee Justice Center, the 2017 YMCA Women of Achievement Award for Nashville and Middle Tennessee, the 2017 Nelson C. Andrews Distinguished Service Award, the 2017 Human Relations Award by Community Nashville, the 2016 Community Award by Alignment Nashville, and the 2014 Justice A. A. Birch Outstanding Service Award by the Napier-Looby Bar Foundation in Nashville. 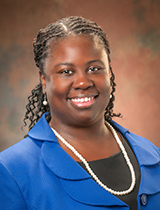