Wendy Tucker is a private attorney with more than 20 years of courtroom experience. She began her career as an assistant public defender and then was in private practice for 18 years, where her cases ranged from criminal trespass to capital murder. She later turned her focus to education law, representing students with disabilities in school-related matters. Professor Tucker co-founded the Special Education Advocacy Center of Tennessee before moving into the role of Nashville Mayor Karl Dean’s senior advisor on education in January 2012. She left that position in July 2014 to focus on specific education reform initiatives as a member of the State Board of Education, to which she was appointed by Tennessee Governor Bill Haslam. 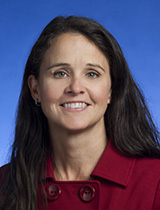