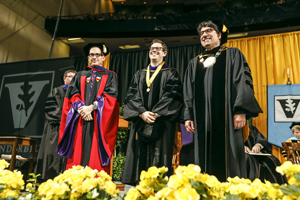 Professor Amanda Rose, president of the Vanderbilt Law School Chapter of Order of the Coif, has announced that 19 graduates of the Class of 2014 have been selected for membership in the Order of the Coif.

Members of this prestigious organization are selected by faculty approval and represent the top 10 percent of the class.

Jacob Hogan Marshall of Dunlap, Illinois (B. A. University of Chicago) – Clerk to Judge Eugene R. Wedoff of the U.S. Bankruptcy Court for the Northern District of Illinois, Chicago (2014-15)