A Nashville native, Tarkington graduated from Vanderbilt’s Peabody College in 1959 before applying to Vanderbilt Law School at the suggestion of a family friend and mentor, Judge Benson Trimble of Davidson County’s Fourth Circuit Court. He was not only admitted, but was also awarded a scholarship.

After law school, Tarkington had a successful sales career with West Publishing and then founded a boutique investment firm, Edinburgh Investments, at which he continued to work until shortly before his death. His son, Bruce Tarkington (BA’98), joined the firm after his graduation from Vanderbilt Law School in 2001.

Tarkington’s success was due to two traits for which he was well-known: a strong sense of personal integrity and an almost uncanny ability to recognize good opportunities and take full advantage of them. After looking over a list of 13 candidates for the Metro Council seat representing his West Nashville district and realizing “nobody on that list was very well-qualified,” Tarkington ran for and was elected to the seat, becoming a charter member of the Metro Council.

After earning his law degree, Tarkington set up a law office in West Nashville and balanced his time between establishing a legal practice and serving on the Metro Council. Then a friend, M.A. McAlister, a successful sales representative for West Publishing, convinced Tarkington to apply for a position with the company, which required that all members of its sales force be law graduates who could read and understand its legal volumes. Tarkington became one of West’s top representatives, spending the next 33 years helping law schools, legal offices and judicial chambers to assemble the reference libraries they needed. He retired from West in 1996 when the company was acquired by Thomson Reuters. After retiring from West, Tarkington helped found two local banks, the Bank of Bellevue and PrimeTrust Bank, which merged with Bank of the South in 1996, in addition to establishing Edinburgh Investments. 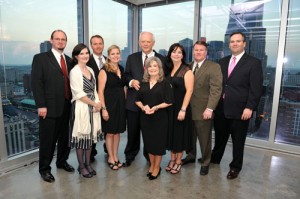 In the late 1990s, Tarkington played a significant role in Vanderbilt Law School’s renovation and expansion, which he helped plan while serving on the Alumni Building Committee and supported with a generous gift. The Tarkington Suite, a library study area that includes a computer lab, computer classroom, a reading room and a study lounge, is named in his honor. Tarkington was honored as Vanderbilt Law School’s 2011 Distinguished Alumnus for his career accomplishments and philanthropy as well as his service on the law school’s Board of Advisors (formerly known as the National Council).