Ganesh Sitaraman’s new book, The Crisis of the Middle Class: Why Economic Inequality Threatens Our Democracy, sounds an alarm. Because our Constitution was written for a nation where economic equality was the norm, Sitaraman contends, widening inequality today is incompatible with our basic structure of government.

Prior to the American founding, societies with deep inequality solved the problem of class conflict by ensuring that people of every economic class were represented in government—for example, through the British Houses of Lords and of Commons. However, in the United States, the founders drafted a constitution that assumed economic equality as a given. Unless we act to shore up and stabilize the American middle class, Sitaraman argues, America’s growing economic inequality threatens the future of our constitutional democracy. “Our constitution wasn’t designed for a country with significant economic inequality,” Sitaraman said. “That makes the shrinking middle class a constitutional problem.”

Sitaraman delves into constitutional history to support his argument that the American constitution is unique. “For much of history, statesmen believed that economic inequality was inevitable,” he said. “It was a central challenge of constitutional design. Either the rich would tyrannize the poor, or the poor would oppress the rich, and the result would be constant strife.” Societies built economic classes directly into the structure of government, thereby creating a balance between wealthy and ordinary citizens.

But, Sitaraman notes, as the number of middle-income people increased, the middle class emerged as a stabilizing power. “In societies where the middle class was large and strong enough, it could hold the balance of power between the rich and poor,” Sitaraman said. America’s strong middle class, he contends, enabled the founders to structure our government as a democracy from its inception. “With no feudalism, no hereditary aristocracy, and vast lands to the West, the founders built the Constitution on the basis of relative economic equality,” he said. 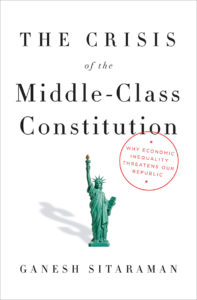 Today, Sitaraman argues, the growing gulf between the affluent and everyone else is a significant threat. Unless we address the issue of economic equality, the American middle class will continue to shrink and, ultimately, he believes, the U.S. will cease to exist as a democracy. “We’ll end up with an oligarchy or revolution and mob rule,” he said. “Neither of these were what the founders envisioned when they were trying to create a representative democracy in America.”

To continue as a republic, the U.S. must take steps to address economic and political inequality—such as campaign finance reform, reinvigorating antitrust law and public utilities regulation, raising the minimum wage, investing more in education and making voting more convenient.

The Crisis of the Middle Class was released by Alfred A. Knopf in March to immediate acclaim. Renowned economist Angus Deaton’s review of the book appeared on the cover of the New York Times Book Review, and the book has been reviewed in the Washington Post, Wall Street Journal and Huffington Post.

Sitaraman officially joined Vanderbilt’s law faculty in 2011, but spent 2011 to 2013 serving as policy director to Sen. Elizabeth Warren, D-Mass., during her successful Senate campaign, and then as her senior counsel in the Senate. The Crisis of the Middle-Class Constitution is his second book. His 2012 book, The Counterinsurgent’s Constitution: Law in the Age of Small Wars, won the 2013 Palmer Civil Liberties Prize.