Joey Blake became the first lawyer in his family when he received his J.D. in May 2020. Joey entered law school after working for two years at Oracle America; he included Vanderbilt among the 16 law schools to which he applied because of its strong Intellectual Property Program. “IP was definitely an area I was interested in because of my experience working for an international tech giant,” he said. “But I ultimately chose Vanderbilt because the school made it clear they wanted me as a student just as much as I wanted to be there. They were the first law school to respond to my application, and they included a great financial aid offer.”

Joey was also attracted by Vanderbilt’s challenging intellectual environment and the broad range of opportunities for students to gain exposure to different areas of law through short courses, interest groups, journals and speakers. “VLS has surpassed my expectations academically,” he said. “I wanted to go to a law school where I would be challenged and intellectually stimulated every day, and the professors and students are top-tier.  The choices for classes, externships, clinics and research assistantships are vast and offer students many ways to explore the legal profession while they’re in law school.”

Joey’s learning experience was enhanced by his classmates as well as his professors. “The thing about VLS is that everybody is incredibly smart,” he said. “When I walked into my first classes as a 1L, I was impressed by every single student in my section. The intellectual environment at the school is great—students continuously learn from one another, and the faculty is one of the best in the country, hands down.”

As a 2L, Joey joined the staff of the Vanderbilt Journal of Entertainment & Technology Law, known as JETLaw. He has served 2019-20 president of the Vanderbilt Bar Association, which represents all VLS students, supports student-led organizations and plans events throughout the year, as a 3L. “The VLS community has made my law school experience invaluable,” he said. “The environment here is not ultra-competitive, and students make a real effort to help and respect one another. I love that there is a diversity of thought, backgrounds, and experiences at VLS.” 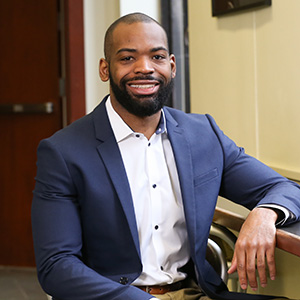