After graduating from the University of Florida, Joshua Minchin married his high school debate partner and moved with her to Hong Kong, where she was a Fulbright Scholar. Joshua taught public speaking to business students at Hang Seng University, and both worked hard to learn to speak Cantonese.

When the couple returned to the United States, they settled in Nashville, where Joshua worked for a refugee resettlement nonprofit. He chose Vanderbilt for law school because of its academic rigor and collegial environment. “When I attended Admitted Students Day, I instantly felt at home and knew I wanted to attend Vanderbilt Law,” he said. “I was drawn to Vanderbilt’s international law classes, especially those taught by Professors [Ingrid] Wuerth and [Michael] Newton, and I was also interested in the refugee law course.”

As a 2L, Joshua joined the staff of the Vanderbilt Journal of Transnational Law, and he served as its editor in chief his 3L year. “Managing our 60-plus member journal staff was an incredible learning and growing experience,” he said. “I got to interface with scholars from around the world to publish five issues.”

He was also a student member of the RISE Reentry Court, a program led by Chief Judge Waverly Crenshaw ’81 (BA’78) that brings together federal judges, public defenders, prosecutors and community volunteers to help formerly incarcerated individuals rejoin the community. Joshua also completed internships with the Federal Public Defender’s Office, the Tennessee Attorney General’s Office, and two federal judges, Chief Judge Karon O. Bowdre of the Northern District of Alabama and Magistrate Judge Alistair Newbern of the Middle District of Tennessee. “These experiences helped to grow and shape my understanding of the law, and I had the opportunity to draft numerous opinions and sharpen my research and writing skills,” he said.

Joshua was an octo-finalist in the annual Bass Berry & Sims Moot Court Competition and served on the Moot Court Board. He also worked as a Legal Research and Writing teaching assistant and as a research assistant for Professor Karla McKanders, who directs the Immigration Practice Clinic. He believes these experiences helped him secure a clerkship with Judge Gregory Van Tatenhove of the Eastern District of Kentucky after graduation. “My experience at Vanderbilt was nothing short of stellar,” he said.

Joshua is thankful for the opportunities he had to collaborate with his classmates and to learn under such an incredible faculty at Vanderbilt Law School. “Members of my class will go on to become prosecutors, public defenders, government officials, professors, judges, partners at law firms, diplomats and more. The law really is an incredible and varied profession, and I’m grateful to be part of it.” 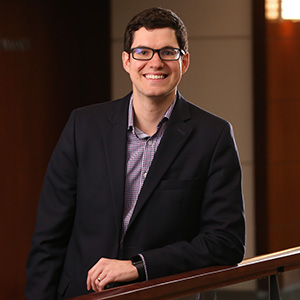