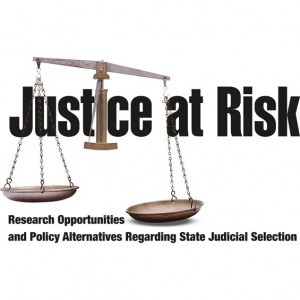 “Justice at Risk: Research Opportunities and Policy Alternatives Regarding State Judicial Selection,” a conference at Vanderbilt Law School March 20-21, will examine the role of money in judicial elections. The conference is jointly sponsored by the American Constitution Society, the American Judicature Society, and Vanderbilt Law School.  Vanderbilt’s Branstetter Litigation & Dispute Resolution Program is coordinating the event.

The conference will focus specifically on how the method of selecting state judges affects judicial decision making. “This issue is of crucial importance to the rule of law in the United States, where state judges decide the overwhelming majority of cases,” said Tracey George, who holds the Charles B. Cox III and Lucy D. Cox Family Chair in Law and Liberty and organized the conference. More than 90 percent of judicial business is handled by state courts, and 89 percent of state court judges face voters in some type of elections.

The conference will begin with two roundtable discussions exploring possible avenues of research based on the “Justice at Risk” datasets, which are the product of an objective and non-partisan empirical study funded by the American Constitution Society. Joanna Shepherd-Bailey of Emory University led a team of independent researchers who collected and coded data on more than 2,345 business-related state supreme court published opinions, which includes opinions from all 50 states during the years 2010 through 2012. The dataset was merged with campaign contributions records for each elected judges’ most recent election and data on the characteristics of individual judges and courts. The resulting “Justice at Risk” datasets are now available from the National Institute on Money in State Politics, a nonpartisan, nonprofit charitable organization dedicated to accurate, comprehensive and unbiased documentation and research on campaign finance at the state level.

Shepherd-Bailey will lead the opening panel focusing on the study’s methodology and results. George, who directs Vanderbilt’s Branstetter Litigation and Dispute Resolution Program and studies the judiciary, will lead a panel addressing research opportunities afforded by the data. Russell Carparelli, executive director of the American Judicature Society, will chair the conference’s closing panel, which will focus on the policy implications of empirical findings for the national debate over state judicial selection reform.

A lunch panel open to the public will address the Tennessee Plan, which currently governs how judges for Tennessee’s three state appellate courts are appointed and elected. Vanderbilt law Professor Alistair Newbern will introduce the “Judicial Selection at the Crossroads: How Tennessee Picks Its Judges“ panel, which will be moderated by Debra Erenberg of Justice at Stake, an advocacy organization, and feature four lawyers involved in the judicial selection debate: Margaret Behm of Dodson Parker Behm & Capparella, Charles K. Grant of Baker Donelson Bearman Caldwell & Berkowitz; Tom Lawless of Lawless & Associates, and Representative Michael G. Stewart, an attorney with Branstetter Stranch & Jennings who represents District 52 in the Tennessee House.

“This conference could not be more timely,” said Vanderbilt Law Professor Brian Fitzpatrick, an expert on state judicial selection who will participate in the afternoon panel discussion. “Every few generations, states have made widespread reforms in how they select and retain their judges. We may very well be on the cusp of another one of these reform periods.  Today, not only are states debating the wisdom of judicial elections, but, perhaps more significantly, they are debating the wisdom of what many of them replaced elections with: the so-called ‘Missouri Plan.’  Indeed, in Tennessee the public will decide this November whether to become the first state to rescind its Missouri Plan—in our case, to replace it with the federal model of selection. Citizens and scholars alike will have much to gain from this event.”