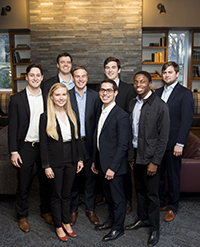 Vanderbilt’s team is one of 50 selected as finalists in January to compete in the SXSW Accelerator Pitch Event. Finalists were selected from more than 600 new companies that applied for the opportunity to present their pitch at the SXSW conference’s Startup and Tech Sectors Track, where leading start-ups from around the world showcase technology innovations before a panel of judges and a live audience.

The students’ startup, Leaf, employs blockchain technology and digital currency to enable refugees to protect and transport their financial assets while escaping conflict. “As families are forced to flee persecution around the world, they have little time to grab limited cash and valuables before leaving their homes–and then their assets are vulnerable to theft and loss,” Robinson said. “When refugees arrive in a new country with more money, they have the resources to participate in the host country’s economy in a meaningful way.”

Robinson believes there is an enormous potential market for Leaf’s asset storage and transport service. The United Nations has designated 65 million people as refugees worldwide, and another 100 million live in a state of social, economic, and political crisis. Many refugees come from areas that lack the banking infrastructure to enable them to access and move their cash, but 60 percent of the world’s conflict zones already use mobile money to make cash transactions. “Leaf targets regions around the world with high numbers of refugees who are accustomed to using mobile money,” Samples explained. “Our initial target is an estimated 150,000 refugees crossing through the North Kivu region of the Democratic Republic of Congo, Rwanda and Burundi.”

Startups compete in one of 10 SXSW categories, and winners will be selected for each track. Leaf will compete against five other startups in the Payment and FinTech category of the competition. Winners will be announced at an awards ceremony March 11.