Pramila Patten, United Nations Special Representative on Sexual Violence in Conflict and Under-Secretary General of the United Nations, delivered the 2022 Jonathan I. Charney Distinguished Lecture in International Law in Flynn Auditorium Nov. 10. Her lecture, titled “Evolution and Impact of the Mandate on Conflict-Related Sexual Violence,” addressed the ongoing impacts of conflict-related sexual violence on women and children, including children born of conflict-related rape. 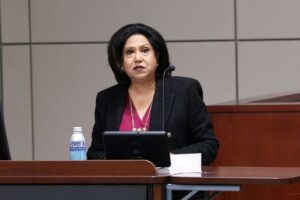 Patten has served since 2003 as a member of the United Nations’ Committee on the Elimination of all Forms of Discrimination against Women. She has judicial expertise in sexual and gender-based violence and in issues affecting women, peace and security issues. She has been a member of the High-Level Advisory Group for the Global Study on Implementation of Security Council resolution 1325 (2000) on women, peace and security since 2014 and has served since 2010 as a member of the Advisory Panel for the African Women’s Rights Observatory within the United Nations Economic Commission for Africa. She is a practicing barrister-at-law in the United Kingdom.

Between 2012 and 2014, Patten was a member of the Advisory Committee of the Due Diligence Framework Project, having previously served as an adviser in the United Kingdom’s Ministry of Women’s Rights, Child Development and Family Welfare from 2000 to 2004; a member of International Women’s Rights Action Watch from 1993 to 2002; and a commissioner appointed by the United Nations Secretary-General to the International Commission of Inquiry into the Massacre in Guinea Conakry, in 2009.

She was a lecturer in the Faculty of Law at the University of Mauritius between 1987 and 1992 and also served as a District Court Magistrate from 1987 to 1988.

Patten holds a Master of Laws degree from University College, London, and a Bachelor of Laws from Ealing College of Higher Education in the United Kingdom.