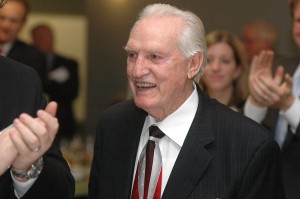 Branstetter was still a member of the firm he founded in 1952 after earning his law degree at Vanderbilt in 1949. He was widely considered one of the best litigators in the history of both the Nashville and Tennessee bars, and the law school’s Cecil D. Branstetter Litigation and Dispute Resolution Program was endowed in his honor in 2005. He was honored with Vanderbilt Law School’s Distinguished Alumnus Award in 2009.

Over the course of his distinguished legal career, Branstetter litigated many high-profile criminal and civil matters. He was best known for his tireless representation of working people, organized labor and his efforts to halt the attempted closing of the Highlander Folk School, which trained civil rights activists, by the state of Tennessee during the civil rights movement. Branstetter defended Highlander founder Myles Horton at trial. “He was really a unique person,” attorney George Barrett ’57 told a Tennessean interviewer. “He dedicated his life to representing those who really needed help. Cecil was one of those rare labor lawyers in the ’50s. There weren’t many of them in the South.”

Outside the courtroom, Branstetter exemplified the citizen-lawyer. Through his civic efforts, he helped shaped the city of Nashville into the metropolitan government it is today, serving on both the 1957 unsuccessful charter commission and the 1962 charter commission that led to the successful formation of Nashville and Davidson County’s combined metropolitan government. He also chaired the Nashville Metro Charter Revision committee in 1976 and continued to serve on the Nashville Metro Charter Revision Commission thereafter.

“He was a major factor in the writing and preserving of the charter,” said George Cate Jr. ‘51, who helped lead the campaign for city/county consolidation and in 1963 became Metro’s first vice mayor, in a Tennessean interview. “He was a real servant.” According to Cate, Branstetter felt “really vindicated” when he saw how well the charter held up—with relatively few amendments—in the decades following its adoption.

Branstetter served one term in the Tennessee General Assembly from 1951 to 1953, where he introduced and sponsored legislation to allow women to serve on juries. “Mr. Branstetter has never been afraid to champion unpopular causes when he believed they were right, even if he was subjected to ridicule for his positions,” his firm biography states.

“He thought the way to improve the lives of the people was through government,” his daughter, U.S. Court of Appeals Judge Jane Branstetter Stranch ‘78, told the Tennessean. “And he thought this government would provide fair treatment to all people in a broader way.”

Branstetter grew up in Deer Lodge in Morgan County, Tennessee, one of the poorest counties in the state. He left home at 18 carrying all of his possessions in a cigar box to enroll at Lincoln Memorial University in Harrogate, Tennessee, becoming the first member of his family to attend college. He worked his way through college by getting up at three o’clock every morning to milk cows in the school’s dairy before attending a full day of classes and then returning to the dairy in the evening.

Branstetter took leave from college for military service in World War II. While serving in the armed forces, he won a competitive scholarship to Oxford University, where he studied law. He used the G.I. Bill to finish college at George Washington University in Washington, D.C., before entering Vanderbilt Law School, where he graduated near the top of his class in 1949.

In a tribute published in the Tennessean, Mayor Karl Dean ’81 called Branstetter “an outstanding attorney and civic leader who dedicated his life to making Nashville a better city and the world a more just place” in a statement Wednesday evening. “His significant role on the Charter Commission that led to our metropolitan form of government will not be forgotten,” Dean said.

Branstetter is survived by Charlotte, his wife of 69 years, along with his four children and 10 grandchildren.