Their work was coordinated by Kentucky attorney Ned Pillersdorf (BA’77), who can barely contain his anger when he talks about the people whose Social Security benefits were revoked because of crimes committed by their lawyer, Eric Conn. Once considered one of the nation’s top Social Security disability attorneys, Conn pleaded guilty in 2017 to bribing judges and submitting fabricated medical evidence to secure Social Security disability benefits for thousands of clients, but then fled to Honduras to avoid prison. He was captured and extradited in 2018 and ultimately sentenced to 27 years in federal prison after pleading guilty to additional charges related to his flight from justice.

“John Grisham couldn’t have come up with the plot of this fraud,” Pillersdorf said.

Conn’s was the largest Social Security fraud scheme in U.S. history. In addition to bribery payments to complicit judges, it involved doctors who signed falsified medical evaluations, and more than $550 million in benefits to clients who were unaware the attorney representing them was committing fraud to get their benefits approved. Most of Conn’s clients were residents of rural eastern Kentucky. Pillersdorf realized that many low-income, disabled Kentuckians who legitimately qualified for disability income would lose their benefits unless they filed successful appeals―and that few would be able to find or afford lawyers.

Legal representation in disability appeals was crucial. Pillersdorf had found that only 20 percent of individuals who represent themselves are successful, compared with approximately 65 percent of those represented by attorneys. However, the research required to present a successful appeal involved a daunting task: reviewing literally thousands of pages of medical records recovered from Conn’s law office.

Pillersdorf and his wife, former Kentucky Supreme Court Justice Janet Stumbo, began working with a team of volunteers that ultimately included dozens of attorneys throughout the nation willing to represent Conn’s former clients pro bono. But, with approximately 3,600 potential clients whose benefits were revoked in the wake of the fraud, the team needed more volunteers to do the time-consuming work of sifting through each client’s medical file to find facts supporting their disability claim that pre-dated their representation by Conn.

Pillersdorf was elated when another attorney engaged in the massive pro bono initiative suggested, during a conference call, that law students could review the medical records. “It was brilliant!” he said. “Students could get real-world experience and help real people by preparing appeal memos, and we could use our volunteer attorneys to present the cases.”

Samuel Lipshie ‘81 (BA’77), whose friendship with Pillersdorf dated back to when they were undergraduate classmates, helped Pillersdorf connect with Assistant Dean for Public Interest Spring Miller. Miller worked with Stumbo and Pillersdorf to organize a training for VLS student volunteers. Retired Clinical Professor of Law Alex Hurder, an expert in Social Security disability law, also provided training and guidance to students interested in helping to review client files. 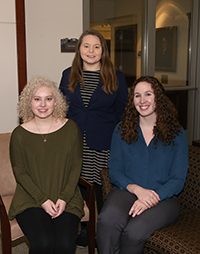 Seventeen Vanderbilt Law student volunteers reviewed 11 medical files and wrote comprehensive memos summarizing all of the medical evidence they could glean from the records that could support the client’s appeal. “We were each assigned one file, because the files are huge,” explained Anna Forrister ’20, who is also pursuing a master’s in public policy and plans to focus on disability law. Forrister and Kira Benton ’21 both reviewed files of over 500 pages. Shannon Vreeland ‘19 shared the work on her file, which numbered over 1,000 pages, with another student.

“Some cases involved people whose disability benefits had been granted by judges who had accepted bribes, and some involved reports signed by doctors who were paid to say the patient was disabled,” Forrister said. “But many of the clients had legitimate claims of disability and were unaware of their attorney’s fraud.”

Forrister had spent summer 2018 working at the Tennessee Justice Center in Nashville on Medicaid cases, an experience that proved helpful in understanding some of the medical terminology. Vreeland and Benton found themselves deciphering various medical terms with the aid of Google and WebMD. “Our job was to identify evidence that the person qualified for disability benefits that was not tainted by the attorney’s fraud,” Benton explained.

Miller forwarded the memos compiled by the students to Pillersdorf so attorneys on his team could use them in appeals hearings.

Pillersdorf has high praise for the students’ work. “Conn routinely did not submit relevant medical records on behalf of his clients, because that cost $20 and he didn’t want to spend the money, so many of these appeals involve medical evidence of disability that’s being presented for the first time,” he said. “The students did an incredible job of identifying potential new evidence and putting together these summaries.”

Another round of appeals will begin in 2019. Pillersdorf is excited about recruiting more Vanderbilt students whose legal research could support successful appeals.