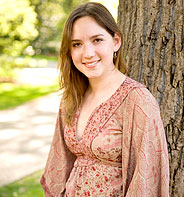 Adriana Speight developed an interest in arbitration while she was studying law at the Instituto  Tecnológico Autónomo de México, known as ITAM.

“In Mexico, working with a law firm while you're studying law is the best way to get a good job after you graduate,” she explains. “I had started out working primarily in civil litigation during my third semester, but I was taking summer courses abroad. I took an arbitration course in France through Hamline University.”

Adriana joined Barrera, Sequeiros y Torres Landa, one of Mexico's oldest law firms, because of its large international and arbitration practice. But she needed to pursue an LL.M. to achieve her goal of practicing international arbitration law. “When you do an LL.M. in the U.S., it gives the lawyers at your firm and your clients the confidence that you have studied the American legal system,” she says.

She chose Vanderbilt because of its international law and dispute resolution courses. “I talked to Professor Michael Newton, and his International Practice Lab was what I was looking for, because you work for international clients,” she recalls. “I wanted my horizons as open and wide as possible.”

After earning her LL.M., Adriana returned to Mexico, where she joined Guerra, González Y Asosiados, one of the top five litigation firms in Mexico. She is now a qualified solicitor in the United Kingdom, where she is a senior associate and international lead in the Practice Governance and Risk team at DAC Beachcroft. "I love my job," she says. "I deal with matters from all of our international offices as well as new ventures, and I have a real feel of international law on a daily basis."