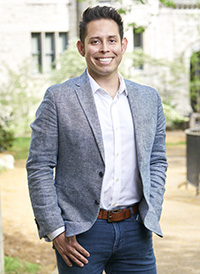 Then he moved to Nashville with his wife in 2015. Alvaro's involvement with Conexión Americas, a nonprofit organization serving Nashville’s large immigrant community, led him to a paralegal position at Tennessee Justice for Our Neighbors, which provides an array of legal services to immigrants, and he realized he wanted to focus his practice on immigration and social justice law. “I was particularly interested in the intersection between criminal and immigration law in the U.S.,” he said. “The area of ‘crimmigration’ is a hot topic now.”

As an LL.M. student, Alvaro took Criminal Law, Immigration Law and Policy, and the Immigration Practice Clinic, as well as courses he knew he needed to take to sit for the New York Bar Exam. “I made a point to take one class that would be different and innovative, because the legal profession now calls on lawyers to take on topics that would have been inconceivable even a few years ago” he said. He enrolled in Robots, Artificial Intelligence and the Law, taught by Professor Daniel Gervais, an expert in international intellectual property. “It was a fascinating course that challenged me in many ways, particularly in having to think and apply current legal theories to future situations,” he said.

Alvaro also took the Pro Bono Pledge, which requires students to complete at least 50 hours of pro bono legal work. He traveled with Professor Karla McKanders from Vanderbilt’s Immigration Practice Clinic and a student from the Vanderbilt Divinity School to the San Diego/Tijuana border to help asylum seekers. “We were able to observe the situation at the border first-hand and serve individuals in desperate need of help,” he said.

He also joined a Pro Bono Spring Break team of students that visited an immigrant detention facility in Ocilla, Georgia, where they screened prospective clients for the Southern Immigrant Freedom Initiative of the Southern Poverty Law Center and worked on motions to secure detainees’ release on bond. “This was an eye-opening experience that helped us understand the reality of incarceration and immigration,” he said.

Alvaro, who speaks fluent English, represented his LL.M. class in the Vanderbilt Bar Association. “It was a great way to get to know students from the J.D. program and share ideas and to represent my LL.M. peers when they had a question or needed assistance from Vanderbilt,” he said.

Alvaro accepted a permanent position with Tennessee Justice for Our Neighbors after graduation, sat for the New York Bar Exam, which enables foreign attorneys to become licensed to practice in the U.S., in February 2020, and learned he had passed the exam in April. He encourages future LL.M. students to “make sure you get out of the library and live the Nashville experience!”