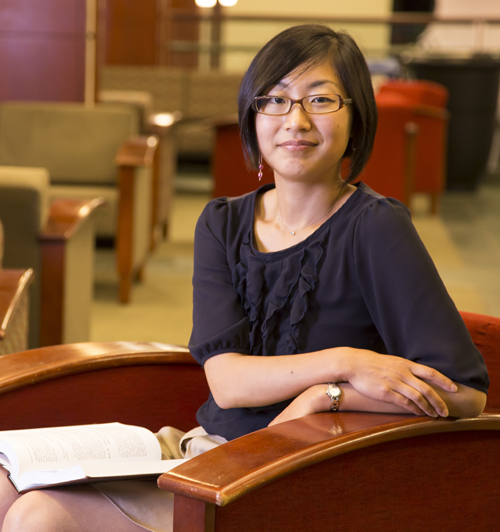 When Asuka Fukushima decided to pursue an LL.M. in the United States, her boss, Kenichi Sannabe, immediately urged her to consider Vanderbilt Law School, where he had earned his LL.M. in 2010. “I was assured I would have a good experience at Vanderbilt," she recalled.

Asuka works for Japan’s Ministry of Agriculture, Forestry and Fisheries, which frequently deals with international issues. “Many of the projects we deal with in the Ministry are complex and involve international trade and environmental regulation, so I wanted to understand international law, the U.S. legal system and the common law approach,” she said.

Asuka was particularly impressed with the quality of instruction in her Vanderbilt law classes. “Professors here are very good at teaching. They made sure we understood the concepts and trained us as lawyers, and there’s a lot of interaction between professors and students," she said.

Asuka also liked the balance between academic concepts and practical skills. “Vanderbilt law professors are friendly, helpful, intelligent, full of knowledge and eager to teach. Since the sizes of classes are relatively small, we get individual attention," she said.

Asuka believes her Vanderbilt LL.M. will inform her work with a government agency. “I deal with international matters like trade and environmental regulation and standardization, so I need to understand international law, the U.S. legal system and the common law approach,” she said.

Asuka moved to Nashville with her three-year-old daughter, and was pleased to find a day school and comfortable apartment near campus. “Nashville is mid-sized city, so I could get to know what a traditional American city is like. Nashville is also the city with country music! And this is a family-friendly city—people are nice, and there are many fun places to go with small kids, such as the zoo, art museum and science center. My daughter and I made great friends at the law school and at her preschool and local community," she said.

Asuka is earning a second LL.M. focusing specifically on international comparative law at George Washington University and then plans to return to her work in Japan’s Ministry of Agriculture, Forestry and Fisheries.