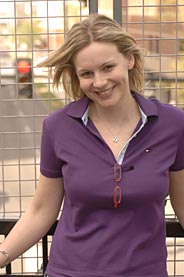 Deborah Rubbens Hutchison, LL.M. Class of 2006, chose Vanderbilt's LL.M. Program because “I wanted the personal attention and sense of community I'd get in a smaller program, like Vanderbilt's."

Deborah, who speaks Flemish, Dutch, French and English fluently and is proficient in German, is originally from Kasterlee, Belgium, and earned her law degree at the Katholieke Universiteit Leuven. She pursued Vanderbilt's thesis track because it allowed her to explore her interest in health policy law. "Vanderbilt's LL.M. program allowed me to choose a faculty advisor, and I wanted to work with Professors James Blumstein and Ellen Clayton, because of my interest in health policy law," she said.

During her year at Vanderbilt, she served as a research assistant for Professor Owen Jones, during which she researched and wrote memoranda on the meaning and use of the concept 'Human Nature.' "During the fall semester, I analyzed relevant court rulings in different jurisdictions," she said, "and during the spring semester, I analyzed religions, including Christianity and Hinduism, and theories of philosophers, including Plato, Aristotle, Marx and Freud.”

Deborah and her husband, Jason Hutchison, J.D. Class of 2007, currently live in Kigali, Rwanda, where Jason is a foreign service officer with the U.S. Department of State, assigned to the U.S. Embassy. Deborah has worked with Strategic Management Systems, a Washington, D.C.-based health care consulting firm that provides advisory services on regulatory and enforcement activities and develops and supports compliance programs, since 2006. She and Jason spent two years in Manila, Phillipines, before he was deployed to Rwanda.