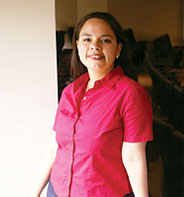 After earning her LL.M. at Vanderbilt as a Fulbright Scholar in 2005, Nicaraguan attorney Giorleny Altamirano was promoted to a new position as senior legal advisor for democratic security issues with the Nicaraguan Ministry of Foreign Affairs. She also served as Advisor to the Nicaraguan Agent working on a case brought against Nicaragua by Costa Rica before the International Court of Justice.

Giorleny moved back to Nashville in 2006 to accept a position as Assistant Director of Vanderbilt University's Center for the Americas, which promotes interdisciplinary scholarship of issues common to North and South America.

“In your year as an LL.M., you have an advisor,” she says. “My advisor recommended me for an internship at the Hague, where I did research in the Peace Palace, and he was the one who encouraged me to pursue publishing my LL.M. thesis.”

Giorleny's thesis, "The Impact of the InterAmerican Convention against Corruption," was published in the University of Miami Inter-American Law Review in 2007.

Giorleny holds a postgraduate degree in banking from Nicaragua's Universidad Centroamericana and diplomas from the Hague Academy of International Law and the United Nations Institute for Research and Training.