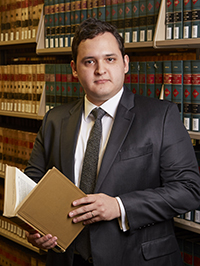 When José Eudes Uchoa started his own corporate law firm in 2014, immediately after earning his bachelor’s in civil law at Catholic University of Pernambuco, he was already planning to pursue an LL.M. in the United States. His goal: Gain a solid understanding of U.S. corporate law so he could better serve Brazilian clients engaged in joint ventures or contractual relationships with multinational corporations.

“In Brazil, most businesses are organized as partnerships or limited liability companies rather than corporations,” he said. “Corporations aren’t the pillar of our economy like they are in the U.S., so I didn’t have the opportunity to learn much about them in law school. I wanted to understand how the American legal system works and how business transactions are structured so I could advise my Brazilian clients regarding international transactions.”

After considering several LL.M. programs, he chose Vanderbilt because of its strong corporate law program. “One of my post-graduate professors recommended Vanderbilt because of Professor [Margaret] Blair,” he said. “He told me I would find terrific professors here.” He took Corporations from Professor Blair along with classes in corporate finance, compliance, and mergers and acquisitions, and he recommends the Corporate Governance short course he took from Justice Randy Holland of the Delaware Supreme Court. “Nothing is better than learning from the source,” he said.

Uchoa also found his course in contracts from Professor Erin O’Connor particularly helpful. “We learned the material of two classes in one. The amount of information we received was fantastic!” he said. “It was really good to understand how American contracts are structured and be able to identify the crucial points I should observe when dealing with international contractual issues.”

Uchoa and his wife were married shortly before he began the LL.M. program, and the couple moved to Nashville together. The Uchoas have enjoyed Nashville’s restaurants and array of music venues. “We have been blessed by making such good friends here,” he said. “We have a very united group of LL.M. students.”

As a law student in Brazil, Uchoa worked as an adviser to the chief of staff of the governor of the state of Pernambuco, located on Brazil’s northeastern coast. He also clerked and interned with several law firms. “I’ve wanted to be a lawyer since I was a kid,” Uchoa recalled. “I never had another option in mind.” Uchoa plans to sit for the New York Bar examination before returning to his firm in Brazil.

“Passing the New York Bar exam is a personal goal of mine,” he said. “But my LL.M. has also provided me with a broader perspective of how international transactions work and how important a role a well-prepared lawyer plays.”