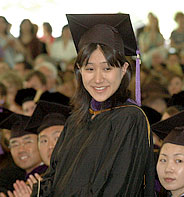 In a single year at Vanderbilt, Mayumi Ikawa Tani earned her LL.M. degree while her husband completed his M.B.A. at Vanderbilt's Owen Graduate School of Management, celebrated the birth of her first child, Arisi, shortly after her graduation in May, and passed the New York Bar Exam.

Before enrolling in Vanderbilt Law School's LL.M. program, Mayumi, who is a graduate of Keio University and a member of the Tokyo Bar Association, had spent a year as a visiting scholar at the University of California, Berkeley. "I was studying the Mafia crime syndicate at Berkeley," she explains. "In Japan, one of the areas I focus on is how to protect victims from Japanese crime syndicates, and I wanted to explore the differences between organized crime in Japan and the United States, and see how the United States struggles with this problem."

At Vanderbilt, Mayumi completed a comprehensive research project comparing how executive compensation works in Japan to the way it works in the United States. Her project was supervised by Professor Randall Thomas, an expert in executive compensation. She was honored at graduation for her LL.M. thesis with an award presented at Vanderbilt Law School's graduation ceremony in May 2007.

Mayumi and her family have now returned to Tokyo, where she practices law.