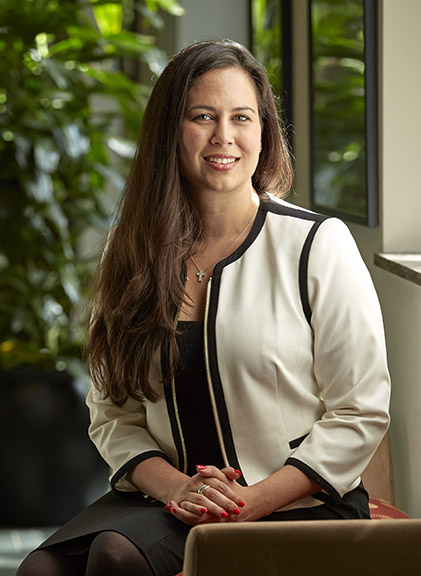 New Zealand attorney Nikki Chamberlain was originally slated to join Vanderbilt's LL.M. Class of 2015, but she deferred her admission to Vanderbilt's LL.M. program for a year to accept a promotion to senior associate at the Auckland law firm of MinterEllisonRuddWatts, where she practices commercial litigation. The firm—which Chamberlain joined in 2007 after earning her LL.B. with Honors at the University of Auckland—not only offered her a year's leave to earn her LL.M., but also provided a partial scholarship.

At MinterEllisonRuddWatts, Chamberlain worked on commercial litigation cases involving contracts, insolvency and professional negligence for clients such as Goldman Sachs, PricewaterhouseCoopers, the Bank of Scotland, the Bank of New Zealand and Westpac. Her international practice and desire to learn more about the U.S. legal system spurred her to apply for Vanderbilt's LL.M. program. "I wanted to learn more about how litigation and, in particular, civil procedure is conducted in the United States," she said.

Vanderbilt's LL.M. program allowed Chamberlain to choose her own courses, and she chose to focus on commercial litigation and civil procedure. "My classes provided an opportunity to discuss the social, political and economic incentives behind the structure of the U.S. legal system, which made for fascinating class discussions," she said.

She has also relished the classroom experience, quickly becoming "a big fan" of the Socratic Method of teaching, in which professors pose open-ended questions to engage students in a discussion of legal cases and issues. "It's like being in court every day," she said. "The caliber of teaching at Vanderbilt Law is very high, and you have to go to class really prepared," she said. "All of my professors are extremely knowledge and approachable—they are all dynamic public speakers, and they use the Socratic teaching method to get the most out of every class."

A U.S. citizen whose family immigrated to New Zealand in 1996, Chamberlain also earned a B.A. in film, television and media studies while earning her LL.B. at the University of Auckland. She was elected as the LL.M. class representative to the Vanderbilt Bar Association, which manages student organizations and activities. "At Vanderbilt, I've met lifelong friends and made business connections with other lawyers from around the world." she said.

"I thought the experience of meeting other lawyers from around the world and experiencing a U.S. college experience would be life-enriching. I was right."