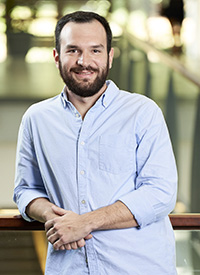 Oscar Del Brutto has divided his time between legal practice with an Ecuadoran law firm that serves international clients and teaching Civil Law at Ecuadoran law schools since earning his law degree in 2010.

Oscar's decision to seek a second LL.M. degree in the United States—he earned his first in 2014—stemmed from a desire to deepen his knowledge of American corporate and contract law to support his practice and teaching. "In Ecuador, I work with American lawyers on a daily basis. On a professional level, I wanted to improve my understanding of the common law system," he explained. "On an academic level, I wanted to learn more about the Socratic Method so I can use it in Ecuador. I also wanted to develop the skills to write and publish academic papers that meet high American standards."

Oscar chose Vanderbilt's LL.M. program because of its top academic ranking. "That was very important," he said. He also wanted the opportunity to take his classes with J.D. students. "At Vanderbilt, LL.M. students are fully integrated into the law school. The classes are small, so you get to know your professors and the other students. When I earned my first LL.M., I didn't get to take all the classes I wanted because some professors did not open their classes to LL.M. students."

One of Oscar's favorite classes was Contracts, taught by Professor Rebecca Allensworth. "That class was an unbeatable experience for me," he said. "Professor Allensworth is an amazing teacher, and Contracts gets to the very core of common law; you discuss the economics and philosophy behind the basic rules of the American legal system. It's a first-year class for J.D. students, so everybody is super-motivated, students come to class well-prepared, and the discussions are of the highest level."

Oscar believes the Socratic method is a particularly valuable way to learn the law. "Professors expect you to come prepared for every class," he said. "They will cold-call on you and ask hard questions. The process can feel stressful, but by the end of the semester, your knowledge has increased, and you are much more confident talking about legal issues."

He was the first Ecuadoran attorney to study at Vanderbilt, but he believes others will follow. "I would absolutely recommend Vanderbilt's LL.M. program," he said. "You learn the law and also the context behind it; and because of the school's small size, you get personalized treatment."