After he earned his law degree at the University of Gothenburg in Sweden, Samuel Hartman went to work for the Swedish judiciary as a law clerk and then entered a training program for judicial jobs, becoming an assistant judge. After five years working for the Swedish court system, Hartman took a year’s leave of absence to earn his LL.M. degree at Vanderbilt Law School. “Earning my LL.M. at Vanderbilt developed my skills as a lawyer,” he said. “It was a great experience that opens up doors to lots of career opportunities.” 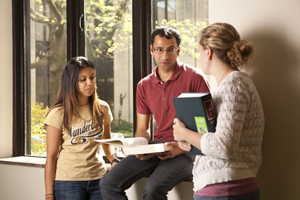 Hartman sought an LL.M. program that would be large enough to ensure he had classmates representing a number of different countries and perspectives, but not so large as to be isolated from American students pursuing the three-year J.D. “I chose Vanderbilt’s LL.M. Program because of the great classes offered at the law school, the excellent faculty, and its location in Nashville,” he said. “All of my classes were regular J.D. classes except for the orientation, legal writing and professional responsibility courses.”

Hartman was one of several LL.M. students who participated in the LL.M. Speaker Series, organized by the student International Law Society, whose members include J.D. students interested in practicing international law. In his talk, he discussed criminal procedure in Sweden.

In addition to relishing his classroom and extracurricular experiences, Hartman enjoyed living in Nashville. “Nashville is great!” he said. “Living here was one of the best experiences I’ve ever had.”