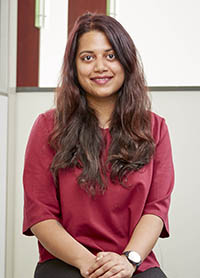 Shreemoyee Bhaduri knew she was interested in pursuing an LL.M. in the United States, but after earning her law degree at Nirma University, she wanted to gain work experience first. “I had specialized in corporate law, and some of my professors had taught courses modeled after U.S. courses,” she recalled. “I was really intrigued by that, and I felt the need to gain a deeper knowledge of corporate law while also learning about another legal system.”

She particularly enjoyed three classes from Vanderbilt’s Law and Business curriculum: Mergers and Acquisitions with Professor Randall Thomas, who directs the Law and Business Program; Drafting and Negotiation of Key Business Documents with Professor Robert Reder, who came to Vanderbilt to teach after retiring from more than 30 years as an M&A partner with Milbank Tweed Hadley & McCloy, and Securities Regulation with Professor Yesha Yadav, who worked at the World Bank before entering the legal academic. “Professor Yesha Yadav’s Securities Regulation was my favorite class,” Shreemoyee said. “She is a ray of sunshine--she brings this incredible energy to the class. The class opened up an entire new career path for me that I earlier did not know I could go down.”

She also appreciated the practical knowledge she gained in Professor Reder’s Key Corporate Documents class. “Professor Reder is brilliant, and his class helped me understand new drafting techniques and ‘ripple effects’ I should keep in mind. He really cares for his students and is extremely helpful. Anyone who is interested in Corporate Law should take his class.”

Shreemoyee recommends Vanderbilt’s LL.M. not only for the exposure to American law, but also for its rigorous academic approach to the law. “It pushed my boundaries intellectually,” she said. “I recommend the program to foreign students who want to go back to their home country to practice. What stands out is a unique blend of the Vandy Law culture of helping one another, the professors, and Nashville, which is the perfectly sized city and has a warm, friendly vibe.”

She is now working as a foreign legal consultant with the Ross Law Group in New York. “I loved studying corporate law here and really enjoyed the speakers,” she said. “Our professors were awesome. Now I want to anchor the knowledge I gained.”