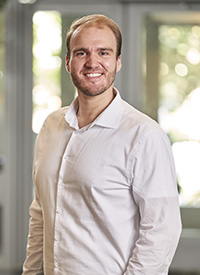 As an associate focusing on intellectual property, IT and media law at the international firm Bird & Bird, Sören Alborn decided to earn an LL.M. to gain a better understanding of the American common law system. “Our American clients like to see that we know where they are coming from when working on cross-border matters,” he said. “The LL.M. program was a good fit for me because it provided an invaluable cultural experience and, at the same time, I had the opportunity to explore the basics of a common law jurisdiction.”

Sören especially enjoyed his Intellectual Property Survey course with Professor Joseph Fishman. “Professor Fishman is an amazing teacher, and the course gives you an overview of all of the basics of U.S. intellectual property law,” he said. He also took Patent Law from Professor Sean Seymore, who has a Ph.D. in chemistry and became interested in patent law because of his interactions with the U.S. patent system as an inorganic chemist. Sören describes his short course in Trademark Law as “very dense and challenging—you learn what you need to know about U.S. trademark law in a single week!”

Sören found the course in Artificial Intelligence and Robot Law he took from international intellectual property law expert Daniel Gervais particularly interesting because it dealt with a rapidly evolving area of law. “Normally, in a basic course like Contracts, the professor tells you what the law is. This course, by contrast, asked what the law could look like in the future,” he said. “Professor Gervais is an exceptional teacher, and the class touched on so many topics we will be concerned with in the very near future. It also addressed a number of basic ethical questions. This resulted in an exciting, yet intellectually challenging excursion into philosophy, which sometimes left me exhausted because—spoiler alert—there is no such thing as a definite answer in philosophy!”

Sören found that classes taught using the Socratic method, through which professors engage students in a dialog by asking questions to stimulate critical thinking, the most difficult adjustment. But he also found it a good learning experience. “In the beginning, I was skeptical about the Socratic method!” he admitted. “It’s rather hard when you are accustomed to classes where professors merely lecture on a topic,  the most common teaching style in many civil law jurisdictions. In Germany, you could earn a law degree without ever having raised your hand and answered a question aloud in class. The Socratic method makes you stay focused in class and teaches exactly what is the bread and butter of law practice: reasoning, debating, and a little fighting as well.”

In addition to the new learning environment, Sören also enjoyed taking most of his classes with J.D. students. “This is where Vanderbilt really stands out. Studying together with J.D. students helps you to improve your language skills and provides an authentic insight into the American university life. You gain a unique cultural experience, fluency in English and a basic knowledge of a common law jurisdiction that certainly give you a competitive edge when your plan is to work for an international law firm or company,” he said.