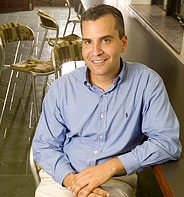 Thomas Fetzer specializes in Telecommunications Law, Media Law and Privacy/Data Protection Law. He has published several articles on Taw Law and European Community Law. Moreover, he co-authors books on Internet Law, Telecommunications Law and Public Economic Law. Prior to becoming dean at the University of Mannheim Law School, he was an associate professor at TU Dresden and an adjunct professor at the Center for Technology, Innovation and Competition at the University of Pennsylvania Law School in Philadelphia, Pennsylvania, U.S.A. He has also taught at Vanderbilt University Law School, U.S.A., the Albert-Ludwigs-University, Freiburg i.Br., and the Friedrich-Schiller-University, Jena.

"For me as a German lawyer Vanderbilt provided a terrific challenge,” Dean Fetzer says. His Vanderbilt dissertation addressed The Taxation of Internet Electric Commerce. “Vanderbilt's unique LL.M. program and the international atmosphere at the law school contributed more to my legal education than I would have ever expected."

Thomas is an active member of Vanderbilt's alumni recruiting network. He returned to Vanderbilt in fall 2007 as a guest lecturer in the LL.M. course, Introduction to Legal Research and Writing in the U.S., and also taught a short course, European Union Competition Law, in October 2008.

He remains in touch with many of his LL.M. classmates. "My year at Vanderbilt really benefited my career as a legal scholar in Germany," Dean Fetzer says, "and I also made friends I'll keep in touch with for the rest of my life."