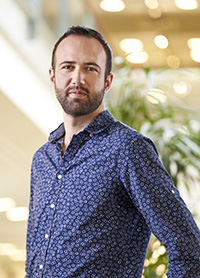 Thomas Nietlispach applied to Vanderbilt’s LL.M. Program for two reasons: A colleague at his law firm gave it an enthusiastic recommendation, and he had already visited Nashville, where Vanderbilt is located, and liked the city. “I worked with Ricardo Schlatter (LL.M. ’15) at Meyerlustenberger Lachenal, and when I asked how he enjoyed the program, he highly recommended it,” he recalled. “I had also visited Nashville with friends to see Roman Josi play hockey, and I really liked the city.”

After earning his LL.M. with the Law and Business Certificate, Thomas is returning to Meyerlustenberger Lachenal, the Swiss law firm where he spent about two and a half year as a corporate associate before taking a year off to earn his LL.M. “I work in transactional law in Switzerland, and we have lots of U.S. clients,” he said. “The courses required to earn the Law and Business certificate help you gain a better understanding of the way they think and their needs. You also take classes like Accounting and Finance that you really need to understand when you work as a business lawyer. I had never taken specific courses in those subjects, and they were really helpful.”

As part of the certificate program, Thomas took Corporations, Securities Regulation and Mergers and Acquisitions. “Corporations provided a good overview of the different legal entities available under American law and the fiduciary duties of board members and directors,” he said. “It was highly enlightening for comparison purposes with Swiss Law.”

In his Securities Regulation course with Professor Amanda Rose, he discovered how complex the legal regime governing securities in the U.S. is. “It’s really complicated,” he said. “And the Mergers and Acquisitions class I took with Professor [Randall] Thomas is a must, because of his detailed analysis of various transactions from a law perspective and a business perspective.”

One big advantage of Vanderbilt’s LL.M. program, Thomas says, is that LL.M. students take most of their classes with J.D. students. Soon after his Corporate Finance class started, Thomas was invited to join a study group by a J.D. student. “I was the only LL.M. student in the group, and I learned a lot from the other students,” he said.

When another young Swiss lawyer, Florian Roth, contacted Thomas to ask about his experience at Vanderbilt, he gave an enthusiastic recommendation. “An LL.M. enhances your career opportunities, improves your English skills and you are better prepared to work on international transactions,” he said. “At Vanderbilt, you get a high-level education. The professors here have strong teaching skills, and there’s a supportive and friendly spirit.”

Thomas concedes that the LL.M. program was academically rigorous. To take a break from classwork, he joined the Vanderbilt Ice Hockey Team and several student professional affinity groups, including the Law and Business Society and the Entertainment and Sports Law Society. “There are lots of interesting lunch presentations,” he said, “and Nashville is a growing city that manages to maintain a friendly, small-town feeling. You’ll enjoy your time here both in class and outside the classroom.”