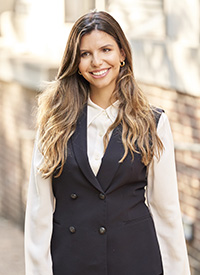 After three years as an associate lawyer with the civil and criminal teams at Castro Advogados Associodos in her hometown of Londrina, Brazil, Vittoria Bruschi Sperandio decided to pursue an LL.M. in the United States to expand her career prospects. "I wanted to boost my career, and the LL.M. was the option most aligned to my goal," she said. "Unlike many international master's degree programs, an LL.M. is professionally focused, but academically challenging at the same time."

She was also particularly interested in the American criminal justice system, having also worked on the Brazilian Bar Association's Human Rights Commission in her hometown of Londrina, where she inspected prisons and the conditions under which prisoners were incarcerated to ensure their human rights were no violated. This work inspired her to take courses in Civil Rights Litigation and Gender Law. "I wanted to expand my knowledge of themes I consider indispensable to debate, such as female empowerment, which is also very important to the U.S. present history," she said. "I've always been passionate about criminal law and business transactions, and I wanted to see the American perspective in both areas," she said.

In her work as an attorney, Vittoria had noticed that financial crimes involving international business transactions often resulted in investigations and prosecutions by U.S. Attorneys. In addition to Criminal Law, she took International Business Transactions from Professor Timothy Meyer, an expert in international trade regulation.

Previously, Vittoria also worked for three years with the Brazil Attorney's Office in units specialized in criminal offenses and in the consumer protection, which gave her experience in dealing with state actors and regulatory matters.

To gain a better understanding of the U.S. common law system, she took Civil Procedure from Professor Susanna Sherry. "I recommend taking Civil Procedure if you are willing to work really hard, because you will acquire a broad understanding of American procedures—and at Vanderbilt you will have a capable professor teaching it," she said. "It's especially important if you plan to work in an American jurisdiction, because even if you have the perfect case, you can still lose in procedural matters. It's also a heavily tested subject on New York Bar exam."
Vittoria chose Vanderbilt because of its high ranking among American law schools, its reputation for rigorous academics and its collegial culture. "This was certainly one of the most challenging years of my entire life," she said. "My days were filled with readings and assignments, and in class I was required to think for myself instantaneously, like it happens in real life, and put together all the information I'd learned from the readings. Vanderbilt also has a reputation of offering a supportive and healthy environment for students—and it's true. I felt at home during the whole program."

Vittoria believes her Vanderbilt LL.M. degree has improved her career prospects and expanded her professional network. "I have job opportunities now that I did not have before, and I feel more prepared and qualified to represent my clients," she said. "I also connected with other lawyers from all parts of the world that I would never have had the chance to meet if it wasn't for the LL.M.—from France, Indian, Switzerland, Germany, Belgium, China and the U.S."