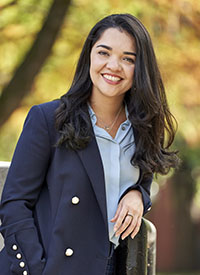 Yasmim Araujo came to Vanderbilt with five years of civil litigation and arbitration experience at Gustavo Padilha Advogados in Rio de Janeiro. Her desire to expand her practice to cross-border transactions led her to an LL.M. job fair, where a colleague recommended that she consider Vanderbilt's LL.M. program. "I've always been interested in comparative and international law, so being in an LL.M. program was a long-term goal," she said. "I wanted to learn more about U.S. law both in theory and practice, so I could work on international transactions."

Yasmim chose Vanderbilt because of its high ranking among U.S. law schools, rigorous academics and the opportunity to take classes with American J.D. students. On the advice of Program Director Cynthia Coleman, Yasmim took Corporations from Professor Randall Thomas during her first semester and discovered an interest in corporate law that led her to take Professor Thomas's Mergers & Acquisitions class and Bankruptcy with Professor Yesha Yadav in her second semester.

"Corporate Law really helps you understand how businesses operate in the U.S.," she said. "Even if you don't want to work in corporate law, it provides relevant, basic information foreign attorneys need to know. I truly began enjoying corporate law—that class changed my study focus."

She also appreciated her Contracts class with Professor Owen Jones. "There aren't huge differences between the basics of contract law in Brazil and the U.S., but Professor Jones engaged students to think about contracts in a very dynamic and practical way—and encouraged us to develop analytical skills I had only learned after years of practice. It was fantastic, and I learned so much more than I ever anticipated," she said.

Yasmim was particularly impressed with the quality of the faculty at Vanderbilt. "Professors are brilliant, they know so much about what they are teaching, and they are dedicated and approachable," she said. "I felt challenged in every class, but thanks to the faculty, I also felt driven to try hard and ask questions so I could learn more."

"I learned so much in Vanderbilt's program, not only about the fundamentals of American law and the U.S. legal system, but also how they affect American society and its view of the rest of the world," she said. "The program is rigorous, but in a good way. I felt supported by the professors to try my best, so it was never too much."

Taking classes with J.D. students, she believes, allows LL.M. students to learn how American lawyers think and about American culture, and contributes to the collegial community at Vanderbilt. "I liked that the LL.M. class was small; it helped us build a sense of community," she said. "And I really liked that we had our classes with the J.D.s and that none of my classes had more than 90 students. I made great friends among LL.M. and J.D. students and participated in a great event with the Women Law Students Organization to help with an NGO focused on empower women and children. That was really enriching."

A native of Rio de Janiero, Yasmim enjoyed living in Nashville, a much smaller city. "There is a lot to do in Nashville outside of class, and the people here are warm and helpful," she said. "The area around campus is very calming. A part of me wants to stay here forever."