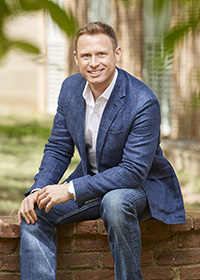 Yuri Mamchur returned to Vanderbilt Law School to earn an LL.M. in fall 2017 to bolster his career in international business development after earning his M.B.A. at Vanderbilt’s Owen Graduate School of Management in 2011. Mamchur had studied piano and music theory at the Moscow School of Music before earning his law degree at the Russian Finance University. After permanently moving to the U.S. in 2003, he founded a prominent public policy program on Russian-American business relations at an American think tank. His entrepreneurial interests eventually led him into business development and consulting on marketing strategy; his Owen M.B.A. helped him structure complex cross-licensing deals and promotional campaigns for major international clients at corporations and in the entertainment industry.

However, while Mamchur has a Russian law degree, he could not practice law in the United States. “I was a licensed attorney in other countries, but not in the U.S.,” he said. “I knew the U.S. legal system was different, but I honestly didn’t have the full appreciation of just how dramatically different it is from European and Asian systems until I started my LL.M. courses at Vanderbilt.”

Now that he has completed his LL.M., Mamchur plans to continue working in business development for corporate and entertainment industry clients. “I will need to work with legal teams throughout my career, when it comes to developing business transactions, including contract negotiation and licensing,” he said. “An executive with a dual law degree who has passed the U.S. bar is much better suited to provide feedback to lawyers from all countries involved in an international transaction.”

Mamchur believes his work experience prior to earning his LL.M. and his understanding of corporate culture enabled him to take full advantage of the ample opportunities Vanderbilt offers to learn about many different areas of law. “The curriculum and faculty at Vanderbilt are absolutely top-notch,” he said. “I was able to zoom in and study certain areas of law to the point of exhaustion! I was fascinated by the differences between the U.S. and E.U. in copyright and property law. In addition to the core classes, I took several short courses and audited a course. Some weeks I was in classes from early in the morning to late at night.”

Vanderbilt professors, Mamchur discovered, were renowned scholars who also offered real-world experience. “The professors teach not only from the standpoint of academia, but from real-life experiences,” he said. “Daniel Gervais, who teaches International Intellectual property, holds multiple leadership positions with international IP organizations, including the World Trade Organization. And the Alternative Business Entities short course was taught by two federal judges who had ruled in famous cases! They had ruled in cases that shaped modern American business and marketing landscapes.”

Mamchur describes his classmates --both J.D. and LL.M. students--as “a pleasant, highly intelligent, professional group of people.” He is already using his LL.M. in his consulting work and plans to take the New York bar in February 2019.