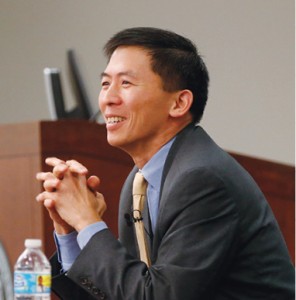 Justice Goodwin Liu, an associate justice of the California Supreme Court, will deliver the keynote address at the 2017 Vanderbilt Law Review Symposium in Flynn Auditorium at noon on Friday, March 31. His talk, “State Constitutions and the Protection of Individual Rights: A Reappraisal,” is co-sponsored by the Branstetter Judicial Speaker Series and the Vanderbilt chapter of the American Constitution Society.

Justice Liu was appointed to California’s Supreme Court by Governor Edmund G. Brown Jr. in 2011 and confirmed by a unanimous vote of the California Commission on Judicial Appointments.

Before joining the state’s highest court, Justice Liu was professor of law at the University of Califiornia Berkeley School of Law. His primary areas of expertise are constitutional law, education law and policy, and the U.S. Supreme Court. He has published widely on these subjects in books, law reviews, and the general media.

The son of Taiwanese immigrants, Justice Liu grew up in Sacramento, where he attended public schools. He went to Stanford University and earned a bachelor’s degree in biology in 1991. He attended Oxford University on a Rhodes Scholarship and earned a masters degree in philosophy and physiology. Upon returning to the United States, he went to Washington, D.C., to help launch the AmeriCorps national service program and worked for two years as a senior program officer at the Corporation for National Service.

Justice Liu graduated from Yale Law School in 1998, becoming the first in his family to earn a law degree. He clerked for Judge David Tatel on the U.S. Court of Appeals for the D.C. Circuit and then worked as special assistant to the Deputy Secretary of the U.S. Department of Education, where he developed and coordinated K-12 education policy. He went on to clerk at the U.S. Supreme Court for Justice Ruth Bader Ginsburg during the October 2000 term. In 2001, he joined the appellate litigation practice of O’Melveny & Myers in Washington, D.C., and worked on an array of antitrust, white collar, insurance, product liability and pro bono matters.

A prolific and influential scholar, Justice Liu has published articles on constitutional law and education policy in the California Law Review, Michigan Law Review, NYU Law Review, Stanford Law Review and Yale Law Journal, among others. His 2006 article, “Education, Equality, and National Citizenship,” won the Steven S. Goldberg Award for Distinguished Scholarship in Education Law, conferred by the Education Law Association. Justice Liu is also a popular and acclaimed teacher. In 2009, he received UC Berkeley’s Distinguished Teaching Award, the university’s most prestigious honor for individual excellence in teaching. He earned tenure Berkeley Law in 2008 and was promoted to associate dean.

Justice Liu serves on the Council of the American Law Institute. He has previously served on the board of trustees of Stanford University, the board of directors of the Alliance for Excellent Education, the American Constitution Society, the National Women’s Law Center, and the Public Welfare Foundation. In 2008, he was elected to the American Law Institute. He has also served as a faculty advisor to the California College Prep Academy, a public charter school co-founded by UC Berkeley and Aspire Public Schools.

Justice Liu’s talk is free and open to the public.