Sam Sergent realized she wanted to pursue a career in international law after studying and interning in Dublin, Ireland, and Auckland, New Zealand. In Dublin, she had the opportunity to work on fitness-to-practice cases for the Irish Medical Council and Nursing Board, and to witness Irish legal proceedings. In New Zealand, she had a unique opportunity to learn about the inner workings of New Zealand’s parliamentary government through an internship with Parliament Member Nikki Kaye. By the end of the semester, Sergent had developed an affinity for the complex issues that arise when interactions involve two or more foreign nations with different legal systems.

After college, Sergent confirmed her interest in law by working for two Boston law firms that handled international cases, Clark + Elbing and Nixon Peabody. She also traveled in South America, visited South Africa with her sister, a Peace Corps volunteer, and worked in Massachusetts for the Obama presidential and Warren senatorial campaigns, and on the special election of Sen. Ed Markey following former Sen. John Kerry’s appointment as Secretary of State. “My work and travel experiences reinforced my desire to go to law school and focus on international law,” she said. “I started looking for schools with good international programs.” 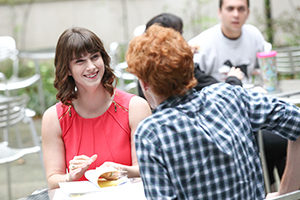 She ultimately chose Vanderbilt Law because of its strong International Legal Studies Program and accessible faculty. “When I visited Vanderbilt for Admitted Students Day, I was able to talk with Professor Michael Newton about human rights law and the opportunities the International Legal Studies Program offers students,” she said. “I was impressed that professors at Vanderbilt were accessible and interested in working with students to achieve their career goals.”

In spring 2017, Sergent was awarded the Helen Strong Curry Scholarship in International Law, a supplementary scholarship available to a first-year student interested in focusing on international law. “Society is increasingly global, and that creates interesting challenges in every area of law,” Sergent said. “I was honored to receive this scholarship, and I’m looking forward to taking upper-level classes addressing the international issues.

This summer, she plans to attend Vanderbilt in Venice, a summer study program that allows students to take four courses in international law from Vanderbilt Law faculty.  She will then spend two months working in the International Humanitarian Law division of Global Rights Compliance, an international legal partnership that fosters and support compliance with international human rights laws.