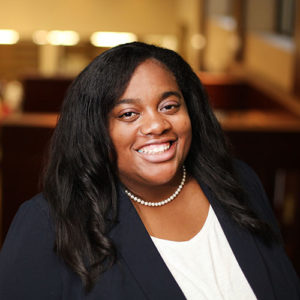 Samiyyah Ali ’16 will serve as a law clerk to Justice Sonia Sotomayor of the U.S. Supreme Court for the term beginning October 2018.

Ali holds an undergraduate degree in psychology from Duke University and an M.A. in higher education from The Ohio State University, where she worked before entering law school. At Vanderbilt, she was Executive Editor of the Vanderbilt Law Review, vice president of the Black Law Students Association, president of the VLS Ambassadors, and a member of OUTLaw. A recipient of both the Hess and Ethel and Cecil Roberts scholarships, Ali earned numerous book awards, was selected for the Cal Turner Program for Moral Leadership in the Professions, and participated in the Vanderbilt Legal Academy Scholars Program. At graduation, she received the Bennett Douglas Bell Memorial Award, which recognizes the student “who is not only well versed in the law, but who shows the highest conception of the ethics of the profession,” and the National Association of Women Lawyers Outstanding Scholar Award. She was elected to the Order of the Coif and received a Dean’s Leadership Award.

“Samiyyah had a stellar academic record at Vanderbilt, and she touched and impacted almost every part of Vanderbilt during her time here,” said Michael Bressman, who heads Vanderbilt’s Clerkship Program. “We take tremendous pride in her achievements.”

Ali is a native of Atlanta, Georgia.