Class Notes are posted in the order they were received, with the newest posts on top.

Do you have news you would like to share or just want to let everyone know what you are up to these days? Submit your class note online, email Class Notes, or call 615-322-2606.

Luke Messer has joined Bose Public Affairs Goup LLC as a principal and partner. He served three terms in the U.S. House of Representatives in Indiana's 6th Congressional District, where he was a member of the House Committees on Financial Services, Education and the Workforce and Foreign Affairs. Posted 10.19.21
Judge Rupert Byrdsong  of the Los Angeles Superior Court was elected 90th President of the California Judges Association (CJA) by the group’s Executive Board at its meeting held yesterday afternoon. He will serve a one-year term beginning October 1, 2021, succeeding Judge Thomas Delaney of the Orange Superior Court. The Honorable Rupert A. Byrdsong was appointed to the bench in June 2014 by Governor Jerry Brown. He presides in an individual calendar court at the Stanley Mosk Courthouse in Los Angeles. Read full article here. Posted 5.20.21

Judge Rupert A. Byrdsong (JD '94) was elected to serve as Vice-President of the California Judges Association. He was also appointed to co-chair a new CJA Task Force on the Elimination of Bias and Inequality in Our Justice System, the largest judicial officer organization in the country. Posted 10.9.20.

Judge Sheila Calloway (BA ’91), juvenile court judge in Nashville, TN and an adjunct professor at Vanderbilt University law School was interviewed by Attorney at Law Magazine writer Susan Cushing about her career and her outlook on the legal industry. Read the full article here. Posted 9.23.20

Rupert A. Byrdsong has been selected as the WRBLSA Judge of the Year Award. His award will be presented at the 52nd Annual WRBLSA Awards Gala on Saturday, January 2020, at Southwestern Law School. Posted 12.18.19

Julia Ambrose  was recognized in the 2020 edition of The Best Lawyers in America©. She was selected by her peers for inclusion in Appellate Practice and Commercial Litigation. Posted 11.12.19 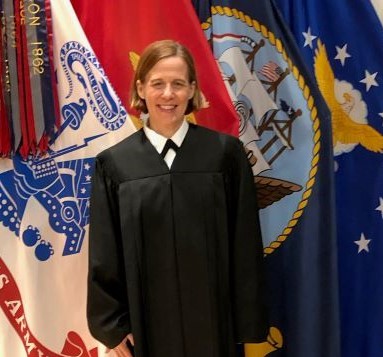 U.S. Navy Commander Kimberly J. Kelly, currently serving in the Judge Advocate General's Corps, was sworn in as a Military Judge on May 5, 2019, and is stationed at Naval Base Kitsap-Bremerton outside of Seattle, Washington.  She has previously been stationed at various bases located within the U.S. and abroad, serving alternately in the capacity of prosecutor, defense counsel, and victim's advocate. Posted 8.6.19

Darian B. Taylor is currently serving as court counsel for the 12th Judicial Circuit Court in Manatee County, Florida, and is a regular contributor to Thomson Reuters' American Law Reports.  Previously, she served as an Assistant Attorney General in New York and Tennessee, and as a staff attorney for the Superior Court for Maricopa County, Arizona. Posted 8.6.19

Lee Edward Dryer died February 1st. He was 55.  He is survived by his wife, Juany Dryer and son, Zachary Wilkerson.  Lee was a former Assistant District Attorney in Williamson County. He was an Attorney at Law and a Judge for the city of Fairview. He enjoyed volunteering and being active in his community. Posted 2.12.19

Rupert A. Byrdsong, Superior Court Judge in Los Angeles, was named a Disruptor by the Ebony Power 100,. This is awarded to individuals who are considered a leader in their field, and have made a positive impact on the African-American community. Read more: https://www.ebony.com/power100-2018/disruptors/rupert-a-byrdsong  Posted 11.20.18

Claria Horn Boom, an attorney at Frost Brown Todd in Louisville, has been confirmed as district judge on the U.S. District Courts for the Eastern and Western Districts of Kentucky. Claria was nominated to the post by President Trump last year, and her appointment was confirmed by the U.S. Senate on April 11. Posted 4.24.18

Melody Hurdle Eagan has been named Managing Partner of Lightfoot Franklin & White in Birmingham Alabama, effective January 1, 2018. Melody will be the first woman to lead the firm. Posted 10.17.17

Claria Horn Boom, if confirmed, will serve as a district judge on the United States District Courts for the Eastern and Western Districts of Kentucky. Claria is currently a partner in the Lexington office of Frost Brown Todd. Posted 6.15.17

Michael Moschel joined Littler Mendelson as a shareholder in Nashville. Previously, Michael was a member at Bass Berry & Sims. Posted 1.20.17

Brian D. Rogers , partner with Fried Rogers Goldberg in Atlanta, Georgia, was installed as president-elect of the 48,000 member State Bar of Georgia. He will be sworn in as the 55th president of the State Bar in June 2017. Posted 8.23.16

MaryEllen Pickrell has been named practice leader at Waller Lansden Dortch & Davis in Nashville. MaryEllen represents hospitals and health systems in the acquisition of health care facilities and organizations. Posted 7.27.16

Dale A. Tipps has been appointed by Labor and Workforce Development Commissioner Burns Phillips to a seat on the state’s recently created administrative Court of Workers’ Compensation Claims. Dale was previously a partner with the law firm of Levine Orr & Geracioti, based in Nashville, Tennessee, where he practiced civil litigation. Posted 9.17.15

Judge Rupert Angelo Byrdsong was featured in a recent article in the Daily Journal for his work as a Superior Court Judge in Los Angeles County. Highlighted were Rupert’s key personal qualities that have enabled him to excel in the position. Posted 7.8.15

Brian D. Rogers was featured for his legal work over his 20+ year career. Buck practices with Fried Rogers Goldberg in Atlanta, a firm that specializes in handling truck accidents that result in serious personal injury or wrongful death. See the article here. Posted 5.15.15

Warren Anthony Jasper has been named administrator of the Brigadier General Wendell H. Gilbert Tennessee State Veterans Home, which is currently under construction in Clarksville and expected to open in the spring of 2015. Jasper served seven years in the U.S. Air Force, including assignments at the Pentagon and as a branch chief with the Secretary of Defense studying electronic warfare with the Joint Test Force. Most recently, he served as an assistant attorney general and senior counsel at the Tennessee Attorney General’s Office. He and his wife Pamela have two children, Christian and Olivia. Posted 1.2.15

Ann Elizabeth Bethune Harris was elected Cobb Superior Court Judge in Cobb County, Georgia. She spent the past 20 years as a prosecutor in the Cobb D.A.’s office. Posted 12.19.14

David Lee Hudson has been named director of academic affairs and legal writing at Nashville School of Law by Dean William C. Koch (JD ’72). David previously served as a senior law clerk for Chief Justice Sharon G. Lee of the Tennessee Supreme Court. Before that, he was a researcher and scholar at the First Amendment Center for many years.  He is the author or coauthor of more than 40 books and a frequent contributor to the ABA Journal. In addition to his position at NSL, he teaches on the adjunct law faculties of Vanderbilt and Belmont University. Posted 12.19.14

Tamara Wenda Ashford was nominated in September 2013 by President Barack Obama to a 15-year term on the U.S. Tax Court in Washington, D.C. She is currently the deputy assistant attorney general for appellate and review in the Department of Justice's Tax Division. The Senate Finance Committee unanimously approved her nomination, and she is awaiting Senate confirmation. Posted 7.16.14

Rupert A. Byrdsong was appointed a judgeship in the Los Angeles County Superior Court by Governor Edmund G. Brown Jr. on June 18. Rupert has been an attorney at Ivie McNeill & Wyatt since 1995 and became a partner with the firm in 2001. Rupert fills the vacancy created by the conversion of a court commissioner position on August 12, 2013. Posted 6.19.14

Luke Messer was awarded an honorary Doctor of Laws degree by the Ball State University board of trustees, ahead of his planned May commencement speech. Luke currently serves as a member of the U.S. House of Representatives for Indiana's 6th Congressional District. He has served as executive director of the Indiana Republican Party and a member of the Indiana House. Luke is an accomplished education reformer, authoring nationally recognized high school dropout reform legislation in the Indiana Statehouse and serving in the private sector as president and chief executive officer of Hoosiers for Economic Growth Network and School Choice Indiana. In 2012, Luke was elected to Congress, where he was then chosen as president of the congressional freshman class and serves on the House committees on budget, foreign affairs, and education and the workforce. Posted 3.25.14

Regina Lynn Daniels-Thomas has been selected to serve as an inaugural fellow by the National Center for Medical-Legal Partnership at the George Washington University School of Public Health and Health Services and the National Legal Aid and Defender Association. During the year-long fellowship, fellows will learn to frame legal services in a healthcare context, build strong healthcare alliances, and use population health data. The fellowship will culminate in a project with a local healthcare entity. Regina currently works as the deputy chief counsel for the Legal Aid and Defender Association, based in Detroit, Michigan. Posted 3.25.14


Timothy A. Spangler has joined Sidley Austin as a partner and member of the firm's global investment funds, advisers, and derivatives practice. Prior to joining Sidley, Timothy was a partner at Kaye Scholer. Posted 12.13.13

David Lee Hudson Jr.'s book on the history of student speech – Let the Students Speak: A History of the Fight for Free Expression in American Schools was selected by CHOICE as one of their outstanding academic books of the year for 2012. In addition, a story of David's, Fired Math Teacher's Retaliation Claim Nixed, was cited by Judge Richard Posner in Judge Posner's public-employee, free-speech opinion in Gschwind v. Heiden last September 2012. Posted 2.5.13

James Michael Wodarski has joined Mintz Levin as a member in the firm's Boston office. James focuses his practice on patent and trademark litigation, representing high tech and life sciences companies, and has significant experience practicing before the U.S International Trade Commission in Section 337 investigations. Posted 8.1.12

Melody Hurdle Eagan a partner at Lightfoot Franklin & White in Birmingham, Alabama, has been selected as president of the Alabama Defense Lawyers Association for 2012-13. The Association has a membership of over 1,000 attorneys who are dedicated to the defense of civil actions and the promotion of fairness and integrity in the civil justice system. Melody previously served as a director and officer for the association, as chairperson for the Trial Academy sponsored by the Association, and as a director for the young lawyers section of the Association. Posted 7.9.12

Michael R. Pauz, Class of 1994,has rejoined the special matters and government investigations practice of King & Spalding as a partner in Washington, D.C. Michael, a senior federal prosecutor with substantial experience investigating and litigating complex fraud, regulatory and financial offences, was previously deputy chief of the Southern Division in the U.S. Attorney's Office for the District of Maryland. Posted 7.15.11

Paula (Fernandez) Lutes and William Lutes are proud to announce the birth of a baby boy, William Austin Lutes. Will was born on January 8, 2011 at Holy Cross Hospital, Fort Lauderdale, Florida. Posted 4.26.11

Robert "Bobby" Guy is a member at Frost Brown Todd. He practices in the areas of business bankruptcy, workouts and distressed acquisitions. His recent book, Distress To Success (Frenetic Market Press) was released in April 2011. He lives in Nashville with his wife (Sydney) and two children (Glory Rose, 12, and Nicholas, 10). Posted 4.6.11