Class Notes are posted in the order they are received, with the newest posts on top.

Do you have news you would like to share or just want to let everyone know what you are up to these days? Submit your class note online, e-mail Class Notes, or call 615-322-2606.

Joshua E. Perry has been promoted to Professor and appointed Chair of the Department of Business Law & Ethics at Indiana University's Kelley School of Business. Posted 5.20.21

Alexander Lian's new book about Oliver Wendell Holmes is available. It is a major contribution to the Holmes literature. Stereoscopic Law looks at its subject in an original way, while bringing key insights to our understanding of Holmes’s famed Path of the Law article. Read More Here . Posted 1.15.21.

Joshua E. Perry, J.D., M.T.S., is the co-author of two textbooks exploring issues at the intersection of law and ethics and author or co-author of over thirty published articles, essays, and book chapters that have appeared in a variety of leading law reviews and peer-reviewed journals across the fields of business, medicine, law, and ethics. Read more here. Posted 3.17.20 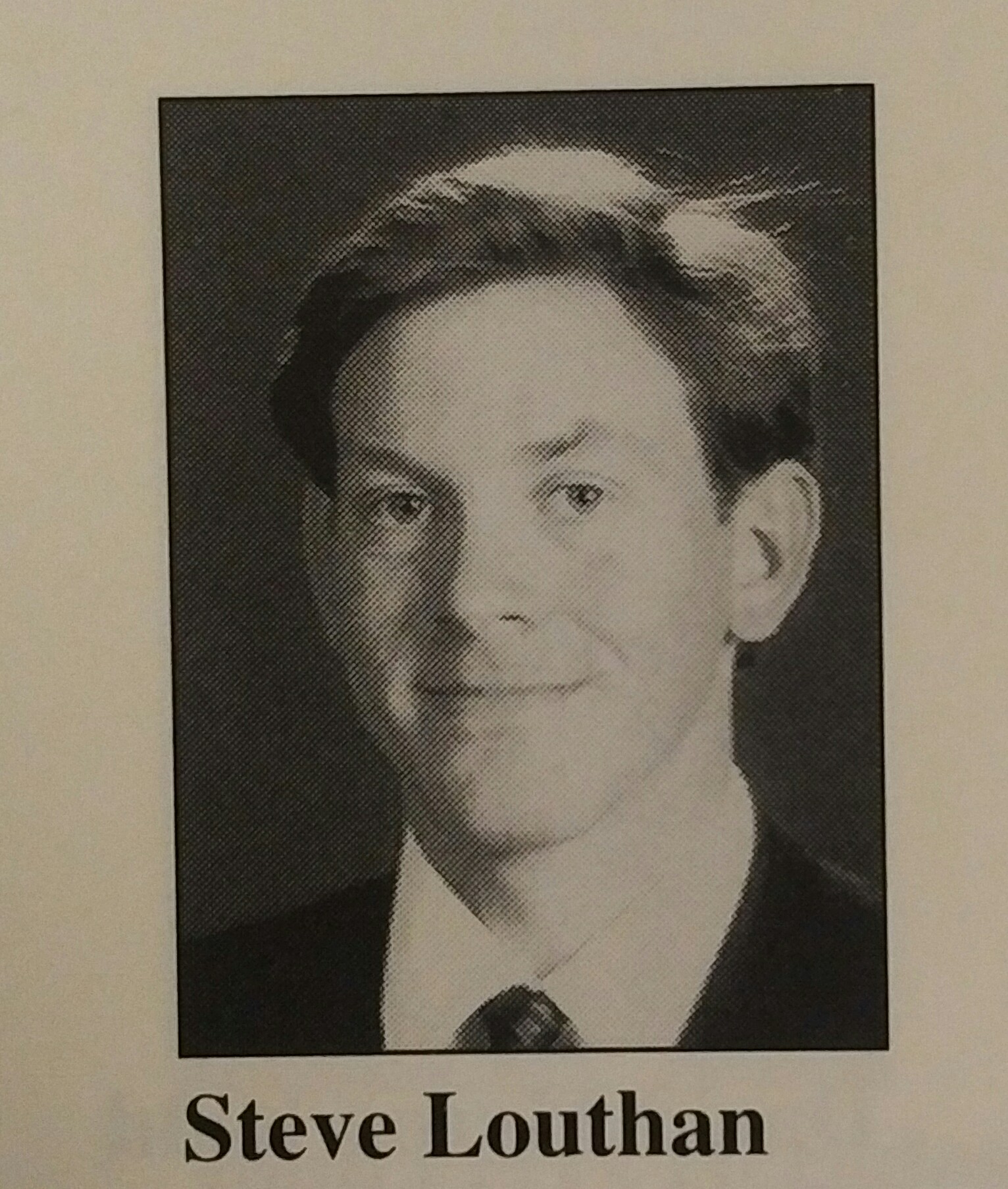 Stephen P. Louthan died November 22, 2012. Stimulating conversations always seemed to revolve around Steve Louthan at the law school. He was a free spirit intellectual, a deep thinker who pursued all of his passions with intense focus. It was a gift to observe him engaged in discourse, calmly reposed, mulling over a complex question, knowing he would readily offer keen insight. Steve was a gentle, compassionate soul, imbued with a quiet confidence and self-reliant to the core. Enthusiastically, he lived out of his van on and off during law school, blazing a trend that was decades ahead of the Silicon Valley tech bros who today have adopted the spartan lifestyle and made it fashionable.

Steve booked his Philosophy of Law class and published "A Brave New Lochner Era? The Constitutionality of NAFTA Chapter 11" in the Vanderbilt Journal of Transnational Law while a member of its editorial staff. Prior to enrolling at the law school Steve majored in philosophy at Calvin College (now Calvin University), earning his B.A. (1994) as well as a subsequent M.A. in philosophy from Western Kentucky University (1995). After graduation, he completed a prestigious clerkship. In 2004 Steve worked on the Howard Dean campaign for President. He also had a brief stint at the EPA in addition to private practice at an eminent firm in Colorado where he focused on environmental, litigation, taxation, and real estate law.

An intrepid outdoorsman, one college summer Steve bicycled all the way across Canada, coast to coast. True to his nature he chose the most difficult route, cycling against the powerful prevailing westerly winds, all the way from Newfoundland to Vancouver, spending his nights in various interesting locales. A highly competitive and naturally gifted skier, Steve enjoyed every aspect of the slopes, from rough and tumble moguls to casually exploring undiscovered backcountry with nothing more than a compass and chapstick. Steve's ultimate passion was rock climbing, and he was an elite talent by all accounts. He once missed an entire week of classes, having been stranded on a very difficult solo climb in Arizona due to inclement weather. Persevering through arduous conditions, rescued only after his local contacts realized he had missed his scheduled check in time. A few days later Steve was back in classes getting called on by professors, his commitment to studying undeterred.

On November 2, 2012 Stephen P. Louthan passed away after suffering a catastrophic fall at Bastille peak in El Dorado Canyon state park, just outside Boulder, Colorado. His closest friends and family members believe Steve suffered from a mental illness that ultimately led to a protracted period of isolation in his later years. They ask those who wish to honor Steve's legacy of compassion to strive to build better communities, to recognize, sustain, and help in recovery those individuals affected by mental illness.

Steve's funeral was held on April 20, 2013 in Baltimore, Maryland, near where his family originates. At the time he was 41 years old. Steve left behind his mother Susan, his father Robert who passed away shortly afterward from Parkinson's disease, his brother Howard, a distinguished professor of history, his sister Marti, as well as his 5 beloved nieces and nephews.

Few have cherished the splendor of nature's wonders like Steve did in his all too brief time with us. Steve Louthan was an exceptionally generous brother and uncle. He remains very much missed. Posted 12.16.19

Joshua Galante has been elected a partner at White and Williams in New York, where he practices corporate and securities law.  Posted 5.8.19

Kevin E. Cadwell is a partner at Kelley Drye & Warren in Houston, where he focuses on complex commercial and technology-related litigation.  Posted 5.8.19

Yanika Smith-Bartley was recently named one of this year’s Nashville Bar Journal’s Women of Influence award winners in the Trailblazer category.  Posted 4.9.19

Michael B. Schwegler, a partner at Ernest B. Williams, IV, PLLC, in Nashville, Tennessee, has co-authored the Tennessee chapter of  Commercial Lending Law, Second Edition: A Jurisdiction-by-Jurisdiction Guide to U.S. and Canadian Law , published by the Business Law Section of the American Bar Association. The treatise sets forth the authoritative summary of statutory and case law relevant to commercial lending in the state of Tennessee. Posted 12.13.17

Robert Charles Bigelow (BS'99)  is serving as First Vice-President for the Nashville Bar Association. Robb has his own practice in Nashville, and is an active member of his community. Posted 12.13.17

James A. Beakes, Jim, has been named 2016 Volunteer of the Year by the Legal Aid Society of Middle Tennessee and the Cumberlands. Jim is a member of the pharmaceutical, medical device and healthcare group at Butler Snow in Nashville. Posted 1.19.17

Anne-Marie Moyes  was featured in a New York Times article, "When Art & Love Save an Innocent" for her involvement in the case of Ndume Olatushani, a man who spent nearly 27 years in prison, 19 of which were on death row, for a crime he did not commit. Anne-Marie served as one of Ndume’s attorneys. She is a federal public defender for the Middle District of Tennessee. Posted 5.30.16

Benjamin Eugene Quayle , former US Congressman from Arizona, has joined HHQ Ventures, LLC as a partner. Ben was previously a member of the US House of Representatives, representing Arizona's third Congressional District. Posted 1.01.16

Jason Marc Gichner is an attorney with Morgan and Morgan in the firm’s Nashville office having previously worked for Dodson Parker Behm & Capparella. He is an adjunct professor of trial advocacy at Vanderbilt Law School. Posted 12.17.15

Ryan William Belville published a post entitled “Your Guide For Making A Lateral Move to New York” on Above The Law.com that outlines the varying barriers to entry for certain practice areas. Ryan is the principal for Lateral Link’s New York office. Lateral Link is a legal search firm. Posted 12.4.15

Matthew A. Thrasher has been appointed to the board for the El Rio Health Center Foundation. Matt is managing partner and attorney for the Thrasher Law Offices of Tucson, Arizona, where he represents entrepreneurs, financial institutions, real estate developers, and other companies and individuals on an array of corporate, finance, real estate and general business matters. Posted 9.17.15

Mitchell A. Peterson has been named a 2015 “Up and Coming” lawyer in Litigation: General Commercial law by Chambers USA. Mitchell is a partner with Davenport Evans in Sioux Falls, South Dakota where he focuses his practice in commercial litigation. Posted 6.25.15

Robert J. Welhoelter has rejoined Waller Lansden Dortch & Davis as counsel in the firm’s Nashville office where he focuses his practice on bankruptcy law. Posted 2.18.15

Steven R. Sedberry has published  Hedging Law School, in which he argues that law school is still worth the investment for students but cautions them to research their decisions carefully. Steven also authored  The Reasonable Person: Due Process of Law, Logic, and Faith  which studies the claims of Christianity through the lens of the legal process. Posted 2.18.15

Yufeng (Ethan) Ma (MS'01) has joined the intellectual property practice for Orrick Herrington & Sutcliffe as a partner in the Shanghai office. Posted 12.9.14

Todd Robert Overman , a member at Bass Berry & Sims in Nashville, has led the launch of the firm’s GovCon Blog, which will focus on timely cases, protests, and regulatory updates to better inform contractors and others in this complex legal space. Posted 10.22.14

Courtney McCormick has been promoted to vice president, deputy general counsel and corporate secretary at PSEG. Courtney jointed PSEG in 2008 and most recently held the role of corporate secretary and general corporate counsel. She also oversees shareholder services, corporate records management and legal administration functions. Courtney previously had worked at the law firms of King & Spalding as well as Pillsbury Winthrop before joining PSEG. Posted 5.21.14

Willow Eden Fort was profiled in a Nashville Ledger article. The piece highlighted her commitment to public interest law after leaving law school. The article can be found here. Posted 3.25.14

James Vincent Pascale III was elected partner at Milbank Tweed Hadley & McCloy, where he is a member of the transportation and space group in the firm's New York City office. Jim was formerly special counsel with the firm. Posted 3.25.14

Deborah Reule Farringer has joined the faculty at Belmont University College of Law as an assistant professor. Deborah will focus her teaching and scholarship on topics in health law and healthcare business transactions. Prior to joining Belmont, Deborah worked in Vanderbilt's office of the general counsel. Posted 1.21.14

Robert Leslie Brown, a partner with Kilpatrick Townsend & Stockton, has been selected to the 2014 Mortgage Bankers Association's Commercial/Multifamily Future Leaders Program. Robert is one of 16 professionals nationwide selected to participate in the 2014 class, and was the only attorney selected. Posted 1.14.13

Laina Reinsmith Miller is a litigation associate for Shipley Snell Montgomery. She focuses her practice on litigation and arbitration of a wide range of matters.  Posted 12.13.13

Paul Anthony Werner III has joined Sheppard Mullin Richter & Hampton as a partner in the firm's business trial practice group. Paul is a seasoned litigator, whose prodigious representations over the past decade have been before all levels of courts and administrative tribunals, federal and state, and spanned a wide range of complex litigation matters. Posted 6.12.13

Joshua Galante has joined White and Williams as an associate in the firm's business and corporate and securities groups. He will reside in the New York office. Joshua has over 10 years' experience handling corporate and commercial transactional work for his clients, including frequently acting as outside general counsel responsible for overseeing all of his clients' legal needs. Posted 3.29.13

Miranda K. Kelley has been named a partner at Waller Landsen Dortch and Davis. Kelley represents clients in the financial, healthcare, real estate and manufacturing industries handling issues including mergers and acquisitions and securities law. She joined Waller Lansden in 2002. During her tenure, Kelley assisted in the formation of a hospice company through a $50 million facilities acquisition. Posted 1.10.12

John L. Farringer , a member at Sherrard & Roe in Nashville, graduated from the Tennessee Bar Association's Leadership Law program, which prepares Tennessee lawyers to serve as leaders in their profession and communities, in July. Posted 10.17.11

Tyson Schwerdtfeger has joined Alliance Resource Partners as corporate counsel. Prior to joining Alliance, Tyson was a partner at GableGotwals in Tulsa where his practice focused on energy litigation. Tyson and his wife, Kenna, live with their two children in Jenks, Oklahoma. Posted 10.17.11

Russell A. Miller has been elected to membership in the Nashville office of Bass Berry Sims. Russ devotes his practice to tax-exempt finance where he regularly represents financial institutions, governmental entities and nonprofit corporations in a variety of financing transactions, including serving as bond counsel, borrower's counsel and/or underwriter's counsel in connection with both governmental and nonprofit bond issues. Posted 3.10.11

Daniel I. Fisher has been promoted to partner at the international law firm Akin Gump Strauss Hauer & Feld. Daniel is a member of the firm's corporate practice. He advises public and private companies on negotiated and contested acquisitions and divestitures, tender offers, exchange offers, joint ventures, spin-offs and proxy contests and handles corporate deals for private equity firms and their portfolio companies. Posted 1.19.11